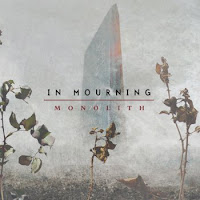 The first comparison I would draw when listening to the sophomore effort of Swedish In Mourning was their extremely popular countrymen Opeth, clearly an influence here on the expressive, drawn out compositional style, or the Travis Smith cover painting. The extremely full, to the point of overpowering death metal vocals over the melodic subtleties and grooving guitar rhythms remind me a lot of Mikael Åkerfeldt, but the band also uses a more snarling tone. There are also some other differences, for example In Mourning is far more into the creation of a simple groove laden in a pretty guitar melody, using only a few notes to paint their emotion, whereas Opeth would write something far more complex (and frankly, often boring).

I found this sophomore effort Monolith to be an exercise in both peaks and valleys, for while there are at least two tracks I can recall to be rather amazing, the remainder of the material was fairly forgettable, aside from perhaps one or two hooks in each song. The band uses a lot of basic pit chugging in tunes like "For You to Know" and "The Smoke", and while this is in effect to offset the more graceful melody careen across the backdrop, it rarely compels more than a basic interest in getting through the track to the next. But there is a lot more capability than I'm making it out to sound, as the band are well versed in a myriad of tempos, leads, and glistening streams of high notes that rarely fail to conjure atmosphere. The powerful melodic line that fuels the chugging of "Debris", for example, is crushing and woeful, recalling the power of mid 90s Amorphis, and this is one of the finer tracks on this record. "Pale Eye Revelation" and "With You Came Silence" are also breathtaking works of beautiful gloom, unforgettable streaming melodies and crescendos of passionate aggression, often collapsing into sheer melo-doom.

I mentioned a 'first' comparison above, because I have two more I'd like to make. I truly feel that fans of the Finnish bands Noumena and Insomnium would do well to check out this band, in particular if they enjoyed the latest effort from the latter, Across the Dark, which has a very similar feel to this, with huge circular hooks and fetching melodies that wail below the huge wall of vocal force. I don't feel this band are quite so good at the style as Insomnium, but the consistencies of mood and production are comparable. Further proof that there is life and a realm of expanded possibility beyond the energetic melodic death of the At the Gates/In Flames/Dark Tranquillity that ruled up until the mid-'oughts, In Mourning have crafted a pretty dense sophomore effort which trumps their debut.