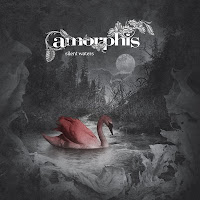 Of all the material Amorphis has penned in the past decade, it is Silent Waters which comes closest in style to their monumental Elegy, narrowing in lyrically on a particular chapter of the Kalevala folk epic and reaching deep into the band's arsenal of riffs to create a memorable crusher that should please fans of that 1996 effort. About the only major difference would be that Tomi Joutsen now gives voice to the poetry as opposed to Pasi Koskinen, and that a few tunes on the latter half of the album drag it down just a little from the perfect heights it would otherwise have scaled. Like the previous album Eclipse, the production work for this record is breathtaking, also recalling the glories of Elegy, and the writing is diverse, making good on all the band's diverse strengths.

"Weaving the Incantation" is a mug-swilling pummeler, weaving the archaic folk/death of Tales from the Thousand Lakes into some subtle female backing vocals and delightful melodies that ramble off across a field of acoustic guitars. The execution of the vocals is perfect, Joutsen may have been wetting his feet with Eclipse but here his delivery is so fluid that you wonder how there was ever a band before he arrived. "A Servant" gallops along at a hammer pace with more of the solemn melodic lines, Joutsen's growls echoing across the hills and heavens in triumphant confidence, while "Silent Waters" begins in a memorable flow of piano that transforms into a slow bludgeoning below clean vocals, and then the killer thick rasberry jam of the curving riff at :50. "Towards and Against" opens with an electronic pulse as the mystical Tuonela-like guitar patterns conjoin with the vocals into another AMAZING riff that chugs along below the melody before the minute mark, and later blowing into a soaring chorus vocal, proving it is one of the best tracks on the album.

"I of Crimson Blood" is slow to rise, but lose yourself to its shining, sanguine rivers of piano and acoustic flourish and it does engross. "Her Alone" is around 6 minutes, and feels similar to the previous track, but does features a few worthwhile vocal lines and builds a pretty solid architecture of sorrow and melody. Then the band adds "Enigma", an acoustic piece with some finely layered vocals, reminding a little of Midnight Oil's more lavish acoustic tracks. After these three tracks, the album could have used a stormer, but instead there is "Shaman", which, while cast in the Elegy mold, doesn't have much of a payoff. "The White Swan" is very evocative, with tiny melodies of both keyboard and guitar fluttering through the verse and a raging chorus slathered in growls. "Black River" is another of the slower, calming songs that dominate this half of the record, and not one of the best on the album, but the bonus track "Sign" (from the Silent Waters CD-single) does kick some ass, and I am glad it was included on the album, with its surging mysteries and powerful guitar line.

Silent Waters is a lot to write home about, an extremely pleasing effort that solidifies Amorphis' return to their prior selves, a band which could balance power and grace on the tip of its tongue. The mesh of folk, death, doom, and progressive rock here may not feel as novel as it did in 1996, but had this been released as Elegy Part II, I would not have been surprised at all. Their experimentation into a lighter sound (1999-2003) was now well past midnight, and for the better. If I were to recommend anything to a newcomer to this band, it would remain Tales from the Thousand Lakes and Elegy. But after that (and assuming you don't want to dive right back to their heavy roots in The Karelian Isthmus), Silent Waters is a very safe bet. There are 2-3 skippable songs, not bad in their own right, but not on par with everything else on the disc, but barring those you've still got 30-35 minutes of prime Amorphis.

Highlights: Weaving the Incantation, Silent Waters, Towards and Against, The White Swan