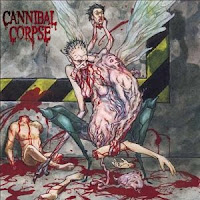 Bloodthirst is more than just the apex of one band's career, it is also one of the finest death metal recordings yet offered via the human race, or certainly one of the finest I am proud to have heard and own. Since acquiring George Corpsegrinder Fisher for the rather average Vile, they have been making leaps and bounds with each release. First, Gallery of Suicide showed their inevitable promise, a technical and bloodsoaked splatter of great songwriting and atmosphere which straddles both the local morgue and the necropoli of the ancient. What Bloodthirst does is chip away every flake of excess fat from the compositions, leaving behind only a bared skeleton of flawless and brutal execution, which simultaneously honors all the great death metal of yesterday (from the Floridian sect of Death and Morbid Angel to the European greats like Pestilence), and shows that the band can run with just about any of the modern day, come lately jazz trained spastic youth who have invaded death metal with virtuoso intentions and left behind little but unmemorable, arrogant tripe thus far.

Bloodthirst is fast and it is pissed, but most importantly, it's kind of album you can totally bang your head out to. Now, I'm an older guy, looking forward to such end of life triumphs as Viagra, checkers, more tea than I drink now, and finding my social security depleted thanks to bailouts and government entitlement programs; the kind of guy who might find it a little awkward to just break out headbanging his already strained neck. But even in writing this review, I have probably slipped at least three vertebrae from gyrating my spinal cord and planting my forehead against the nearest solid object (computer desk). The energy here is among the most have ever ventured, and it is the listener who reaps the gain. The album features what many will one day come to know as the 'best', if not the 'classic' lineup of the band, with Fisher on vocals, Jack Owen and shredder Pat O'Brien on the guitars, Alex Webster ruling the bottom end, and the veteran skinner Paul Mazurkiewics, and each is at the very top of his career. But this is not some over-indulgent display of axe wankery, it is a force against nature which clearly has designs on the life of every human being breathing our atmosphere.

"Pounded Into Dust" is essentially the best way to describe me upon completion of a Bloodthirst listening, and yet it is presented up front as a dire warning to any who may continue into its curving, hammering depths. As usual, Cannibal Corpse are not ashamed to wear their thrashing influence on their bloodstained sleeves; now I know, yeah, all death metal comes from thrash, but Corpse show a huge love for both the brutal and technical European elements of the Germanic bands to the aggression of US/Bay Area/Canadian speed/thrash ala Slayer, Possessed or Razor. You can hear this in nearly every rhythm in this song, but my favorite would have to be the escalating, bludgeoning guitar passage around :40 that then breaks into a trot. "Dead Human Collection" arrives like the sense of paranoid confusion one might evoke upon the discovery of some hideout or backroom full of bodies piled high, having been massacred in all manner of brutal means. It's a wall of chugging force that constantly evolves into an even more concrete affirmation that your end is due in short order. But even this deathgasm would not prepare me for "Unleashing the Bloodthirsty", which is a likely candidate for my favorite Cannibal Corpse track ever...from the winding, unforgettable pattern of grooving mutes that comprises the verse, to the psychotic bridge which recalls the atmosphere of the classic Consuming Impulse from Pestilence, only a little more busy.

One would think you could just pen this tune and call it a day, for it is really that good, and yet there are still eight fantastic compositions to come, beginning with the roving, cerebral sledgehammer riffing of "The Spine Splitter", with it's maniacal collapse into blanketing bass and tapping madness. "Ecstasy in Decay" features a riff so fucking menacing that you can't help but feel you have left the world of the living, and suddenly see everything with necrotic humours pumping into your eyes from the entropy of a rotting brain. Acrobatic, tumbling rhythms entertain you like an undead circus act while you wait for that inevitable, domain crushing intro riff to return...and thankfully it does, albeit mutated, progressing into even more grisly gymnastics. "Raped by the Beast" is fun and thrashing hard, with razor rhythms strung as tightly as a garotte around the next victim's neck, while "Coffinfeeder" transforms from a brickhouse bludgeoning bass to a dark, choppy rhythm that could probably put most lumber companies out of business. The frenzy of clinical sounding, operating table mayhem that later erupts is some of the best you've heard post-Carcass.

"Hacksaw Decapitation" opens in distorted feedback, slowly swelling to inglorious capacities before the tunneling rhythm guitar erupts after about 70 seconds, straight into another hack and slash rhythm that almost teases you into thinking it will be boring before the band trades off into a creepy riff that covers you in arterial spray. "Blowtorch Slaughter" is a flippant, ferocious thrash off which grinds more pavement than a fleet of 18-wheelers piloted by zombie truckers. The rhythms transmit a very simple aesthetic: die, and when they get to the four on the floor thrash breakdown and then the seceding chug-a-long, you are in fact, dead. "Sicking Metamorphosis" crawls forward with another of the band's sluggish, mad scientist rhythms, you can simply close your eyes to picture the horrific experimentation the band was dreaming up with the narrative of these riffs, and the later melody builds a brutal and complex pace to the guitars which later morphs into even more vulgar lab results. The final track, "Condemned to Agony", is another island in a see of flawless, painful, violent joy, with freakish melodies that play to the thrashing verse guitar as Fisher's throat opens up, and then waves of psychosis that strike at you like a leeching abomination before Cannibal Corpse decide, for the last time, to pummel your fucking world down about you with an instant pit mayhem type of riff at around 1:30.

With the victims of his knife, he is now beset
Reliving every crime
Condemned to agony
No escape from their hate

More than 10 years may have passed since the arrival of Bloodthirst, but it remains, in my opinion, the crowning achievement of this band, holding all the right cards for the perfect balance of their styles both old and new. It's complex, it's forceful and it is a seriously kick ass way to acclimate yourself to the world about you for 34 minutes. There are hundreds, if not thousands of death metal albums I have enjoyed in my time since the genre was birthed, but few that I will immediately grasp off the shelf for a fast and reliable fix sure to sate my dementia for a crushing, heavy sound that satisfies both in attitude and quality. Bloodthirst is one of them. I don't know what stars aligned in the sick world of the Corpse crew to compose this, but I hope that anomaly happens some time again in my lifetime. Later albums like Kill and Evisceration Plague actually come quite close to this one in terms of their quality, and have arguably more energy and production standards, but this is the true turning point at which a band that had been hyped through the ceiling (and granted, they had some great albums already like Tomb of the Mutilated, The Bleeding or Gallery of Suicide) suddenly was in full control of deserving such praise.

Cannibal Corpse has often been a target of death metal's detractors, because of their willingness to embrace the fantastical gore and murder of their creations as an art form. Ignorami will always single them out because of their higher visibility, and their popularity and success has even forced a segment of the underground who once worshiped them into a bunch of thumbsucking curmudgeons. Guess what? They are all wrong. Here is your lucky number #7, your living...err...undying (?) proof that they are one of the best death metal has to offer. Now bang that fucking head until you go all sleepytime.

Highlights: modern science has advanced enough medical technology that you will probably survive this. That is, if you want to.