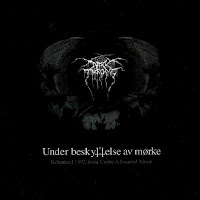 Of the many Darkthrone releases out there, the Japanese release Under Beskyt'telse av Morke is likely the least valuable. Not to collectors, as the CD and 12" vinyl were released in a very limited pressing (the CD was 666 copies) with a bunch of bonus material, like stickers, badges, postcards, and a toy (as Japanese are won to do with their omake boxes). But to the average listener, there really isn't that much on offer here, simply a trio of outtakes from 1992's Under a Funeral Moon rehearsals. I may be a huge fan of this band, but not to the level at which Fenriz could spit in a handkerchief and I would buy it on eBay for $100. And Under Beskyt'telse av Morke is a creamy, wopping wad of spittle, with perhaps one exception.

"Unholy Black Metal" and "Under a Funeral Moon" are both decently bloodied rehearsal pieces, and yet, they aren't nearly as vibrant and raw as the versions from the full-length, which buzz with misanthropic evil and crypt stench. The vocals for the latter are quite good, with the proper amount of vitriol that blends straight into the burgeoning guitar rhythm, the excellent half Hellhammer and half Slayer-tribute that it is, but even then, I prefer the album cut. Also...that squeal! Aaaaaagh. No, perhaps the only piece of questionable value on this release is the instrumental take on "Crossing the Triangle of Flames", which might have resonated with the 1-2 fans in Japan who actually wanted to use this at a karaoke, scaring off all their friends and certainly their dates for the evening. And if not scaring off that date, he or she is a keeper! I obviously prefer to have my vocals here, but I can see using this as a battle theme for a 1st edition Dungeons & Dragons game where the players are all forced to wear corduroy pants and tight t-shirts with faded prints from 25-30 years ago.

And yet I digress, because there is nothing else to do with this EP but digress. It's a niche release for a very niche audience who will buy anything with the band's logo printed on it, and exactly the type of waste of plastic and print and resource that I am loathe to permit as I've become awakened to the benefits of digital media and less overall garbage in the universe (about as hippy as I get, don't worry). I'm guessing most people are not among the privileged few to own this, and thus have downloaded it for themselves, which is a better alternative if you are seeking to karaoke with utmost grimness.