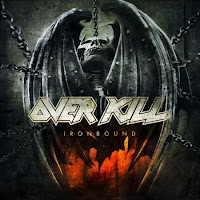 I have a lot of respect for Overkill, I really do, and I once wore my greens and blacks with pride through the 80s, which sadly remain the pinnacle of their career as far as recorded output. They're cool guys, they put on excellent live performances (even well beyond the 80s), and who the hell could deny that they are one of the most persistent bands in metal music. Most of the bigger names broke up, went through massive musical changes, got back together, or died of overdoses in the past 20-30 years, but not Overkill. They've been with us all along, thrashing out through the years with nary a difference in their stylistic delivery aside from occasional lapses into more modern, crushing grooves, or different studios and tones, but even then, they still maintained the core values that make them the most enduring thrash band of the NY/NJ area (sorry, Anthrax, maybe if you hadn't fallen through the cracks...)

With all this being said, Bobby Blitz and his wrecking crew have not delivered an album that knocked my socks off since 1987's Taking Over. There have been great efforts (Under the Influence), good efforts (The Years of Decay), and then a whole lot of just okay efforts...albums that usually feature 2-4 killer cuts and then a heap of filler which rarely, if ever makes it onto the bands live sets or into the long term memory of their fans. They're like a lichen growing across the surface of that 19th century bronze vase you've got out at the edge of your property: they give the world a little bit of extra class, but beyond that, pretty useless. Ironbound is the band's 16th album, and it's a pretty staggering accomplishment to even REACH that number of albums, especially when we're talking about full fledged studio efforts and not 2 kids in their bedroom using pro-tools to build a black metal legacy. Overkill is older, certainly, and probably wiser too, but one listen through Ironbound and you'll realize they have lost nothing of their youthful edge. Arguably, this is also the band's best work in many years, clinging proudly to the thrash and speed of their roots, and it's successful enough to have older fans banging their heads, and younger fans performing windmill kicks and walls of death to drain off their excess testosterone, but it's still not the great return to form I have always hoped the band would one day produce.

Thankfully, it's fast and fun thrash metal which doesn't often give you an opening to ponder just why you don't care for it. "The Green and Black" is a nice tribute to both the band's history and especially the fans that have kept fueling it over the years, but I have to question why it needs to be 8 minutes long. This could have been snipped to 3-4 minutes and had the same effect. By the slower breakdowns later in the track, I was mighty bored. Not really the case for title track "Ironbound", which truly thrashes out like it was Under the Influence all over again, and it carries the 6+ minutes pretty well, with Blitz' undeniable vocal charisma howling and screaming through the night. Speaking of which, "Bring Me the Night" is another smoker, with a total old school speed metal vibe that alternates into the chugging vocal verse. "The Goal is Your Soul" is another cautionary thrash tale, at a strong mid tempo, but not too memorable. "Give a Little" and "Endless War" both have their moments, solid beatings but with maybe 2-3 catchy riffs among them.

"The Head and the Heart" recalls some of the band's more moody, atmospheric tunes from past years, in particular the "Overkill" series of songs that they penned for the first few albums. A simple clean, chorused guitar breaks into a slow-paced rhythm reminiscent of Megadeth's "Symphony of Destruction", and Blitz dips into a little of his late 70s/80s hard rock edge before the thrash fist returns. "In Vain" loses nothing of the energy of the first half of the record, but doesn't quite stand out, while "Killing for a Living" is a concrete blast of urban brutality with a string of mighty riffs and interesting variations through the vocals, from a kind of narrative style in the verse to the more aggressive bridge and chorus. "The SRC" has some cruel grooves and steady pounding drums, another good if not great refresher on the old school sounds they used to churn out in the 80s, with a breakdown assured to get the kids flailing about and the wife to pull out her hair.

Ironbound sounds great, with punchy guitar riffs and one of the more charismatic frontmen in the genre. Blitz still knows how to use his voice as a weapon, it is both sadistic and unforgettable which is more than I can say for like 99% of the retro thrash bands currently clogging up the drainpipe, waiting for the flush. I can't help but think that a little more time to brew, and a scrapping a few of the more average tracks here, could have produced their best album since The Years of Decay, but true Overkill diehards will probably be very satisfied with the headbanging catalysts found within. Here's to another 16 albums, old friends. Don't let us down.

Highlights: Ironbound, Bring Me the Night, Killing for a Living