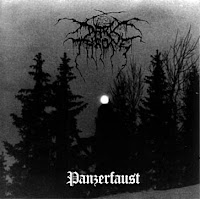 1995 may have seen a shift from the more visible Peaceville Records to the little known Moonfog Productions (Satyr of Satyricon), but there was no shift in Darkthrone's dedication to spawning blasphemous, cold filth into the scene, which is what Panzerfaust, their 5th longplayer, represents. At this point the black metal movement was in full swing, bands choosing sides and drawing the line between 'keeping the faith' (Burzum and Darkthrone) or breaking the bank (Cradle of Filth and Dimmu Borgir), and the church burnings and murders of Euronymous were the gossip of the world. Meanwhile, melodic death metal and gothic metal were also taking off, with labels snapping bands up in a frenzy once more to cash in before the trends were spent.

Thus, it was only fitting that Fenriz and Nocturno Culto release their harshest record yet, an album that returns to the Hellhammer worship of their earlier years, and to some extent leaving behind the monotonous, rampant brilliance of Transilvanian Hunger. Once more, Fenriz was responsible for all the instruments here, and he sought a more dynamic, if primal tone to the tracks, grim as a family of cute forest animals cut off from their normal food and water supplies, starved and frozen to death slowly over the winter months. Where before the similarities to Celtic Frost were in the riffs alone, here the guitar tone actually sounds the closest to the source, with the band's simple, psycho bends and drudging chords, but this aesthetic is not dominant throughout the entire playtime, as there are some faster songs. The band also returned to English lyrics for the most part, with three exceptions on this album.

Opener "En Vind Av Svorg" actually seems like a direct continuation of Transilvanian Hunger, with a faster beat and streams of haunting notes that feel like sunlight escaping through a woodland canopy, its boughs and branches littered with rime and decay. There is no change in pace until about 3:45, where the beat remains driven but the guitar transforms into this great, grooving death metal riff. "Triumphant Gleam" is quite derivative of Celtic Frost, to the point it feels like you just put on your Morbid Tales vinyl and realized there was a bonus track you hadn't noticed prior...save for Nocturno Culto's barking, tortured vocals. This might actually bother me if the song weren't so goddamned excellent, in particular the sparse, doomed chords that barrel out beyond 1:30. "The Hordes of Nebulah" continues this pace, a crawling, evil riff which sounds like a corpse evaporating, its ghost dispersing into the air while the flesh flowers with maggots and vines, all in painful slow motion:

Oh, Father (the) Fog of Nebula
your faithful children have escaped
The Walls of Eternity
The Elders Curse-
like Snow of the Solstice of the Sun

Ever wanted to get stoned to a Darkthrone track but just couldn't find that perfect track on any of the previous albums? Well, this is the one, so light 'em. "Hans Siste Vinter" returns again to the Transilvanian Hunger formula, a steady driving beat through about two riffs. It's entertaining for about two minutes, but this is one of the tracks I could have used less of, or rather, it could have used a little more deviation. The central riff is simply not as immersive as the material on the previous album, so it can't keep you strapped in for the entire ride. "Beholding the Throne of Might" has another big Celtic Frost groove, and another testament to how Darkthrone can take the most asinine, simplistic riffs and transform them into a huge, unforgettable shitstorm of torment and melancholy. As the guitar chugs over the basic fret pattern, you can feel the black ichor rising from within, ready to be retched forth like a human sprinkler. In short, it rocks, and the little descending guitar melody is perfectly placed before the 3:00 mark, before the pace picks up into a bruising rhythm.

"Quintessence" is the album's longest track, with a majestic slower riff that recalls to me the early work of Tiamat (up to Clouds), but with the obvious difference in vocals. There are only about 2-3 shifts in the guitars throughout the track, so at over 7:30 in length, you would suspect it gets boring, but it surprisingly doesn't, since the purity of the central rhythm causes one to look forward to it repeatedly. "Snø Og Granskog (Utferd)" is something very different for Darkthrone, a martial ambient piece with some bombastic, synthesized horns and Fenriz' folk vocals over sparse percussion. I remember needing a few spins to acclimate myself to it, but it's pretty charming if you give in to it, though possibly belonging more to one of Fenriz' other projects than here (Neptune Towers, Storm, Isengarde, etc.)

Panzerfaust is a pretty interesting crossroads for Darkthrone. After all, most would consider it the first album beyond their 'classic' era (1991-1994), and many bands don't survive a few albums out. Landing right in the center of the decade, i.e. the 'death of metal' years (for those who didn't know where to look), it seems a refreshing blast of black energy, completely anathema to the trend of the day, which involved more melodic guitars, an increased symphonic presence, and trying to bridge the 'accessibility gap' to bring new listeners into the fold. It was clear that one band (at least) would survive all this change and keep things to a minimum, and here is the proof.

Highlights: Triumphant Gleam, The Hordes of Nebulah, Beholding the Throne of Might, Quintessence