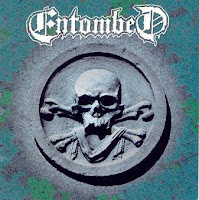 After the band's departure from Earache, to make the most of their own Threeman Recordings imprint (and a distribution deal with Music for Nations), the original label would offer two more of the 'important' releases in their discography, the first being this self-titled compilation in 1997. Many labels use compilations as a cash grab to reprint material they've already released and at the same time fill out contractual obligations with artist they have worked with, and the motivation for this could have fallen in that realm. Fortunately, Entombed is a pretty useful collection of rarities that many of the band's fans might have skipped over, or remained blissfully inattentive of, in particular the EPs and singles that have been culled to flesh out this album.

First is the Out of Hand EP, which was released in 7", 12" and CD formats in 1994, with the title track appearing as the final track on the CD version of Wolverine Blues the year before. This consists of "Out of Hand", a steady rocker which doesn't quite live up to the rest of the material from that album, but nonetheless builds to a pretty raging thrash rhythm close to the climax. Also included (here and on the EP) were two cover tracks. One of KISS' "God of Thunder", which is a cool choice for the Swedes, but aside from having the harsher lyrics and punchier guitar tone, it's not all that great, and I'd choose the original any day. "Black Breath" is a better rendition, from the seminal grind gods Repulsion, given a nice thick treatment due to the guitars, but void of surprises.

Next, the Stranger Aeons EP, which features an album track from the Clandestine album ("Stranger Aeons" itself), an unreleased number known as "Dusk", and an older Nihilist track known as "Shreds of Flesh" which also appeared on the first Entombed demo But Life Goes On in 1989. I've already covered the EP in its own review, and though I question the need to have the title track here, at least it's an act of completion, and it is good to have the other tracks, despite their boxier-than-usual sound quality. The Crawl EP follows, with "Crawl" from Clandestine, "Bitter Loss" from Left Hand Path, and the non-album track "Forsaken", all with the vocals of Orvar Säfström, which are passable, but not quite as strong as the Petrov's "Bitter Loss" or Nicke Anderssons take on "Bitter Loss". So "Forsaken" is really the best value of these if you don't own the original EP.

Following the three EPs comes the cover of Texas psychedelic rocker's Rory Erickson's "Night of the Vampire", which originally appeared on a split with Ohio's New Bomb Turks. It's a moody take on the classic, with a nice Danzig-spin on the vocals and the thick, grinded up edge of the guitars delivering a crushing force above the melodies (which are sadly, a little understated in the mix). The Full of Hell EP is represented here with "State of Emergency", a cover taken from the debut of Irish punk heroes Stiff Little Fingers. I've only heard the original once or twice, but the riffs don't seem to impress me any more in Entombed's capable fingers as the original digits. The compilation closes with a take on Unsane's "Vandal X" which at the time was unique to this release, and it's the best of the covers found on Entombed, even if brief...of course if you stay tuned though a few minutes of silence, you're in for an added 'treat' at the very end of the CD.

There's nothing all that impressive about the material here, but it's handy to have all in one location, and that is the only reason I'd really recommend owning this to the Entombed fan with the cash to burn. It could truly have benefited from some unreleased originals (like the Hollowman EP did), or even the inclusion of Hollowman itself, but contract stipulations with Columbia probably forbade that. This comp also loses a little of its value due to the covers all being reprinted on the Sons of Satan Praise the Lord compilation, but that was released years after this and who could have known. It's likely a lot cheaper to pick this up at a record shop than the four EPs and the split where its contents originated, just keep in mind that nothing here is nearly as good as the first three albums, and it's little more than a well organized curiosity.

Highlights: having more money left over to buy an Entombed t-shirt or perhaps a bootleg lighter with their logo on it.