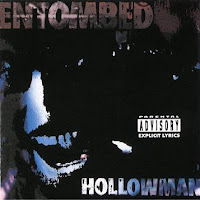 In 1993, suddenly it must have struck both Entombed and their new conglomerate overlords Earache and Columbia (the two had struck a deal which resulted in a bunch of releasing like Wolverine Blues and Heartwork reaching a far wider audience than they might have otherwise): let's do an EP properly! And Hollowman is just that, a short player release with enough unique material that it was well worth the asking price. And, not only was the content here largely original to the release, but it was also pretty fucking good. This was 1993, and thus Entombed had already begun to mutate their style towards a more rock & roll outlook, helping coin the phrase 'death & roll', but if you listen even back to their first two albums, you'll hear it in small amounts. Here, it moves out to the forefront, with Petrov's vocals howling like a mad wolf over a bunch of blues-based rhythms married to their carnal, grinding guitar tone.

"Hollowman" was not my personal favorite track off Wolverine Blues, but it's catchy and downtrodden and features that pretty excellent guitar sequence at 2:00 which paints the mental image of the Swedes sitting on a Mississippi porch staring off into the swamp in their backyard, which is shambling with undead, secrets and regrets. "Serpent Speech" is a fucking outrageous tune with a grinding volley of pumping, testosterone fueled guitars and a great little pause where a gun fires...I like everything from the lyrics to the hardcore fistfuck that erupts after the first lead, but if the band sounds like they've gone a little too far, they haven't: a killer if brief death metal rhythm erupts just after that. I'd have to say this is one of my favorite Entombed songs, easily the equal of just about anything from Wolverine Blues, and I wonder why it wasn't placed there...but then, it gives this release all that much more value.

The version of "Wolverine Blues" here is not the same as found on the album, but a karaoke version overlayed with samples of a zoologist (probably a band member, I'm guessing, due to the cussing) discussing the animal in question. It feels a little hamfisted, and a little too obvious, but the song itself is a great piece of groove oriented death rock, in particular I enjoy the thick bite of the opening riff. "Bonehouse" takes you right back to yesteryear, with the same grinding abandon you would have heard on Left Hand Path, only with the arguably better production the band was using in '93. It's fast, loaded with bullets and vitriol, and another of the primary reasons you should purchase this.

That leaves two more tracks. "Put Off the Scent" opens with a choppy rhythm, and i mean choppy like take your axe and hit the fucking tree repeatedly, before it breaks off into a flowing hard rock groove, with chords used as a counter-melody. There is a dash of Zeppelin and Sabbath here, but the band returns to their ghoulish death metal for the bridge between verses, and plenty of huge hooks. The finale is a metallic rendition of the Hellraiser theme, complete with samples, which are used often and in place of vocals. It's actually a really interesting idea (not the last this band would come up with) and works quite well, with enough kickass riffs to carry the atmosphere and conjure the darker side of the film. The shrill guitars after the 5:00 mark are pure money, and that closing riff sequence is pure horror...

Entombed truly outdid themselves here, forging an EP that has more value than the previous two combined, and I'd have to say it still ranks as one of their very best shortform works. It's not entirely void of redundancy, since "Hollowman" and "Wolverine Blues" appear on the full-length this was teasing, but at least the latter is in a mildly different form. Buy it, you won't regret it.