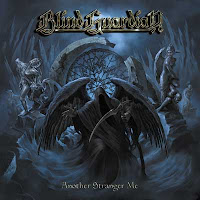 Another Stranger Me is the 2nd and final single for A Twist in the Myth, with an extended EP release format, featuring 5 musical tracks plus the video for "Another Stranger Me", which was honestly not that bad, taking the Dark Tower-based lyrics of the song and instead setting up a detective character with a split personality disorder (a film noir Jeckyl & Hyde). As for the value of this single, that is debatable. There is more material here than the average offering of its type from this band, but only 1-2 of the tracks are actually worth seeking out. It seems to be another case of wanting to slap together some fancy cover art with the Blind Guardian logo and eke out a little profit.

"Another Stranger Me" is a good song, an obvious choice for a single due to its infectious hooks and big band rocking attitude, but it has not changed here from the album it was originally released on, so scratch the first 4:35 of value from this release. "All the King's Horses" was originally included as a bonus track on the Japanese version of the full-length, a simmering and tranquil piece which deals in the folklore of Taliesin and the Holy Grail. This is a relaxing enough track, but I can certainly hear why it wasn't good enough to include on the domestic version of the album, there just isn't much to it aside from the balladry of the atmosphere. For "Dream a Little Dream of Me", Blind Guardian reach back into the past for another cover which smacks of the commitment they once had to a "Barbara Ann" or "Enter Sandman". However, I actually do like this cover, the way they transform the standard into an often plodding but satisfying rhythm. Of course, it's already been covered on scores of recordings by artists all across the musical spectrum, and not quite as good as when Blind Guardian clutches on to a classic track like their great covers of Satan and Demon.

The remainder of the EP consists of two demo versions of album tracks "Lionheart" and "The Edge", neither of which really comes close to the final cut, and therefore they do not hold much interest, since I would never exclaim "OH MY GOD. I need to hear the demo version of LIONHEART! So much better than everything else the band has ever recorded! I am glad I spent money on this, indeed!" Another Stranger Me has an inherent value somewhat greater than prior singles from this band, but the cover is the only thing I could give a shit for, and even that leaves a little to be desired.

In short, don't waste your money on this. Download "Dream a Little Dream of Me" and maybe the Japanese bonus track. Then forgive and forget. Or better yet, forget, but DON'T forgive, and don't pander the cash to any more of these Blind Guardian singles. Then maybe they'll stop wasting the plastic to package them.