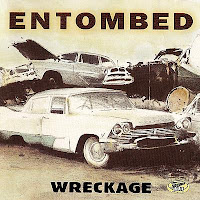 You could read it in the cover image before ever hearing a sound: Entombed loved the newfound 'success' their rock leanings had veered them towards, and with each release after Wolverine Blues, they would venture further into this territory. The problem was, most of their actual success had come from word of mouth buzz about their older albums, when they were a death metal band (up to and including Wolverine Blues, a fascinating fusion of the two expressions), and many initiates were flocking to their gigs to hear "Bitter Loss", "But Life Goes On", and "Stranger Aeons", not to hear a bunch of brutal graveyard grinders perform rock and roll music (best left to their associates The Hellacopters). Still, Entombed deserves a little credit for not entirely abandoning their roots, and at least To Ride, To Shoot Straight and Speak the Truth was loyal to Wolverine Blues, if not the amazing debut or almost as worthy Clandestine.

Now, I'm not trying to come off as someone who opposes change, for there are certainly a number of bands who have successfully incorporated the more mainline rock style into their extreme influences. In fact, I wouldn't say Entombed failed. Their whole schtick about washed out Americana, dirty southern rock & roll joined to aggressive hardcore, grind, punk and death was a novelty, and got them some attention, but this period of the band's career was simply not as promising as their first three albums, and those will always receive the most critical acclaim. The Wreckage EP was the teaser release for To Ride, To Shoot Straight and Speak the Truth, and like Hollowman before it, it features one album track and then a bunch of material unique to it (though I warn you, they're all cover songs). But the value really rests upon your collector status or your fondness for the band's middle years, neither of which I possess.

"Wreckage" is a pretty familiar sounding tune, because it doesn't fall far from the tree that was Wolverine Blues. A bigger, stereo production, blazing guitars with little groovy tails like rock & roll comets, and a screwy breakdown where the band drops out, probably drops acid, and trips their way back into the meaty rhythm chords. Honestly, it's not all bad, and if you've seen become a fan of The Hellacopters, or say, Turbonegro, it will probably appeal to you. Interestingly, this is the final track on the full-length. And it's also represented here with the "Wreckage (Indy Cart Larceny Remix)", which feels like a "Jesus Built My Hot Rod" take on the track, extending it out with cheesy techno rhythms. Not the worst remix out there, by a long shot, but I could have lived without it.

After this, we get a cover of Twisted Sister's "Tear It Loose", one of many Entombed would choose over the ensuing years to solidify their rock cred. It's fun, it's edgy, and given the full Swedish treatment, with thick guitars that seem even more vibrant than the original. "Lost" is a cover of punks Jerry's Kids, and it creates a crashing melancholy through the big guitars and roughshod drumming, but the riff itself is simply not that interesting, no matter how much frilly violent Swedish tone you pump into it. With the "The Ballad of Hollis Brown", Entombed do about as much justice as they can to a Bob Dylan track, but again, the original is pretty fucking dull, and the riffs here consist of only a few boring notes. If it's the lyrics you seek, well, you won't make them out here more than the original. Following and finalizing the EP, a cover of the Dwarves' "Satan", a numbing organ into a fast paced, rugged take on an already kickass little slice of grunge and punk, with Lars channeling a little Glenn Danzig into his howling.

Do you want to hear Entombed performing a set of diverse covers from hard rock, punk and bluegrass influences? Well, some of these are alright, in particular the Twisted Sister and Dwarves numbers, but aside from this, I simply cannot find much to recommend in this release. The techno remix of the title track is lame if not horrible, the title track appears on the album, and the other covers are kind of a bore. Entombed circa 1994-1999 is a period which I gladly tend to skip past, as it produced very little of note, and I wasn't really on board again until Uprising, which I admit did get my goose. If you really liked their more rock oriented albums in 1997 and 1998, and you seek more of the same, this is for you. HOWEVER, it should be noted that the four cover tracks here ARE in fact reprinted on the 2002 compilation Sons of Satan Praise the Lord, with a lot more. They're also reprinted on the CD version of the Black Juju EP. In my opinion, it would be better to gather them up there than try and track this release down.