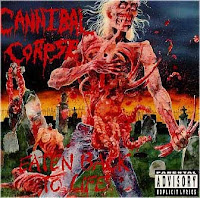 It's difficult to be objective about an album when one's own nostalgic feelings for it clash with the quality of the actual product, and the Cannibal Corpse debut Eaten Back to Life provides me with quite the personal paradox. On the one hand, I spent months with a crazy friend/band mate of mine cruising around with this in the car, for it was quite brutal in its day and we both thought it was hilarious, in particular the lyrics. On the other, it certainly hasn't aged very well, and though it is not lacking in extremity, I wonder if many of these tunes were so great to begin with. I should warn the reader in advance that I am a card carrying member of the club that favors modern Cannibal Corpse (fronted by George Corpsegrinder) over the Chris Barnes years. Through the years, they have developed a level of complexity and evil riffing that very much appeals to what I seek in the death metal genre. However, this is not to say I have any particular disdain for the first four albums...I just don't like them as much as a Gallery of Suicide or Bloodthirst.

Eaten Back to Life features the classic lineup of Jack Owen and Bob Rusay on guitars, Chris Barnes on vocals, Alex Webster on bass, and Paul Mazurkiewics on the drums, and it has a hybrid thrashing/death metal tone which sounds quite like a midway point between Floridians Xecutioner/Obituary and the late 80s Sepultura material, with a very punchy distortion that adds a hostile, emotionless weight to the rather monotone grunts of Barnes. This is nearly as brutal as bands could sound back in 1990, without going over into the realm of chaos or noise. As always, Cannibal Corpse were very careful songwriters who balanced their faster paced bludgeoning with a sense for the groove breakdown that would influence countless thousands of bands to follow in their serial killer footprints. There are 2-3 tracks on this debut which still cause my neck to jerk out of control and my thoughts turn to dark places that a rational mind should not travel...but I've really got to be in the mood for the rest, because I find most rather average, and without reading the lyrics along to the music I might think even less of them.

To start with, "Shredded Humans" is one of the most memorable pieces on the album, for its violent, chugging intro riffs that relapse into a wild flurry of icepick riffing and then a pair of subsequent, killer breakdowns that begin at 1:20. The lyrics to this deal with a homicidal maniac to smashes his car into some poor family's, killing most of them and then cannibalizing the one child who survives the impact. The end of the track has a sporadic, evil spike of leads in the vein of Slayer, which works nicely into the testosterone freakout that is "Edible Autopsy", itself a mix of death thrust and groove that doesn't develop into much beyond a Sepultura-like deep thrashing breakdown. "Put Them to Death" is short and spastic, and though it may force the head to bang out it leaves nothing memorable, not even when Chris Barnes exclaims 'FUCK YOU' in the bridge. "Mangled" is brutal as fuck, yet once again there is no immortal hook to balance the bludgeoning with a memorable reason to revisit. "Scattered Remains, Splattered Remains" has a nice, slow workup to the point at which it once again transforms into a demolition team worth of jackhammer, but plain riffing. The bridge rhythm after 1:00 tries to build a frantic and paranoid atmosphere to some success, but it honestly gets tired after about 4 repetitions.

That's a lot of colorful verbs in there! "Born in a Casket" lurches about like a zombified neanderthal, spiked club in hand and ready to bash in some unfortunate's skull and then feast on the brain matter within. It's one of my favorite tracks on the album, because it makes for the perfect soundtrack to playing the hungry undead with your friends while drunk. Do the zombie! "Rotting Head" and "The Undead Will Feast" are both fast, winding numbers that blow by in under 3 minutes each; again, nothing is so memorable that I'd want to listen to it over many of their more recent tunes. "Bloody Chunks" is briefer still, and rather dry despite its ferocious pace and busy skull crushing rhythm, and "A Skull Full of Maggots" follows suit, though I find this one ever so slightly more memorable than the lesser half of this album. "Buried in the Backyard" ends the album with about the same length as "Shredded Humans" opened it, and it too features some of the strongest riffs on the album, like the surgical thrashing of the pre-verse rhythms.

There is an almost sacred stature built up around this album, and understandably so, as it was the debut of the most successful death metal in history, who would go on to release an entire stable of decently selling efforts, and build a reliable reputation as a headlining band. But when we look past the hype and the early excitement of America finding its 'voice' for offensive, ridiculous gore metal, Eaten Back to Life is not all that special. It sounds like a drought, rather than the wet sloshing carnage which one would expect alongside the lyrical matter. It's fun to listen to a few times, and the lyrics are entertaining enough. If you've never heard it, but you enjoy the tones and style of Sepultura's Beneath the Remains, Obituary's Slowly We Rot, Death's Scream Bloody Gore or Leprosy, then it might be something to check out.

Highlights: Shredded Humans, Born in a Casket, Buried in the Backyard