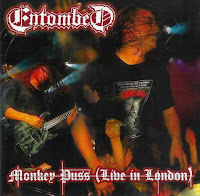 This would be the 'other' Entombed release of note after the band departed from Earache Records, with a rather interesting story behind it. In short, this was a bootleg floating about the scene which Earache snapped up and decided to give an 'official' release, padding their pockets and filling out a residual obligation they had with the Swedish tyrants, who were at this point already a pair of albums deep into their Threeman Recordings/Music for Nations deal. The performances captured here were taken from a 1992 London tour, so at least you were getting the amazing Entombed of their first two albums, and not the forgettable death rock & roll the band were in the process of puking out of their systems.

One of the reasons it was chosen for release (on both album and VHS formats) was the purported quality of the sound, which I guess is basically true here. This sounds like any vibrant Entombed live performance of the day, with the chunky guitars even chunkier than their studio album counterparts, and Lars-Goran Petrov sounding a lot sloppier, like he's drunk on something he shouldn't have mixed with his medications. It's definitely not bad, but I'd never recommend any of these versions over the studio work, as they lack a little of the subtlety and mood found in their proper forms. The drums also feel as if they might fall off track during at least a few of the songs, but quickly fixed so it's not a major distraction.

As for the material appearing on the live, it's exactly 50/50 between the two albums, which makes sense; Clandestine was the album being touted and toured upon when the recording was taken, but the band's buzz was still fresh on the ears and most fans were probably still getting into Left Hand Path. We've got "Living Dead", "Stranger Aeons", "Crawl", "Sinners Bleed", and "Evilyn", all good choices from Clandestine; and "Drowned", "Revel in Flesh", "But Life Goes On", "The Truth Beyond" and "Left Hand Path" from the debut. Some of the older material sounds a little careless here, in particular "Revel in Flesh" which sounded slightly downtrodden and out of tune, even moreso than it should with the down-tuning. The opening riff to "Evilyn" also sounds pretty weak here, losing a little of the pumping mute sensation that makes it so great on the studio version. A few of the songs do sound adequate, like "Crawl" and "Left Hand Path".

Monkey Puss (stupid title, by the way) is the sort of bootleg that probably should have remained a bootleg. It's great to capture Entombed in their raw, live environment, and much of the tone here is loyal, the guitars crunchy, and the bass throbbing, but there is no benefit to hearing this over the studio side, and having caught one of their performances since, I can say that the band has certainly improved in leaps and bounds. In other words, this was pretty much bound for the bargain bins; it's like a weak little smear of Zima in your vodka & tonic, quickly absorbed and distilled by the superior quality of everything else. Very easily forgotten or ignored.