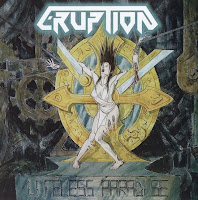 Eruption is another of those thrash bands who manage to surprise you by sticking to a retro sound yet not falling into the self-effacing blunder of being too 'thrash'. By this of course I mean they write songs about particular subjects, and often interesting lyrics, as opposed to just singing about beer and thrash metal itself, which so many of these shit-eating acts out there seem content to do (in their endless envy of Tankard). No, Eruption is pretty damned talented, and that they hail from Slovenia only compounds my surprise, since it is not a country I normally associate with the genre. The actual riffing component of this band is a toss-up between the thrust and energy of the old school Bay Area sound (Metallica, Exodus, Testament, and so forth) and the harsh edge of the Germans Destruction. Klemen "Buco" Kalin is a wild gunner with a voice that ranges from mid range to screeches that recall very early Araya and Hetfield, if only they were Slovenian...

The actual blistering riffs of Lifeless Paradise, their debut album, are just good enough that the album is worth a few replays, even though I couldn't call the songs instant classics or in any way destined to be remembered among the top of the crop. Musicianship is not the issue, as you can hear from the acrobatic bass lines of "Monumental Mind" or the ever busy guitars and off the hook leads. Some of my favorite tracks on the album include "The Auditors", with a lot of momentum over raging guitars that sound like a mix of Paradox and Artillery. "Democracy" has some thrash hard rhythms, wailing vocals and a pretty cool opening sample from the 1976 film Network. "Twisted Reality" has some cruel, deep diving guitar work beneath some of Buco's crazier, almost silly intonations, and "The Sands of Time" closes the album with arpeggio leads that weave their way into a thundering, melodic charge riff.

We are many, we are one
Like an omni-present mind
We watch the world through selfless eyes
see how flawless it could be

Nothing too shabby here, and even the instrumental "Inner Wastelands" has a few moments of interest. Most importantly, despite the rather hyper flair the vocals can often exhibit, Eruption are a band who take their chosen style seriously and would rather be remembered alongside the forerunners of the genre than the gajillion bands sucking up their fumes. I'm not sure Lifeless Paradise is the album to push them over the top, for it does lack something in the way of memorable, classic riffing, but if all the talent here could be maintained and then steered into the proper direction, we could see a band that explodes alongside the best of Europe's newcomers. As it stands, this is a debut of good thrash metal from a young band that can play their instruments well, and only have to allow their compositions to gestate a little longer in the incubator, that they can rise above the crowd.