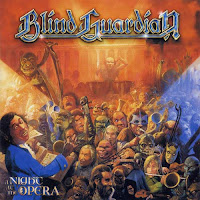 In 2002, the world was Blind Guardian's to lose, as they had amassed perhaps the largest following of any German power metal band since pioneers Accept. Their fans were spread far and wide, within the metal scene and beyond into the realms of the Peter Jackson Lord of the Rings following, geeks, Renaissance Faire rejects and gamers everywhere. Blind Guardian is one of those few bands that even the fringe metal fan appreciates. I think we all knew that awkward youth, with his hands in his pockets, greased hair and acne that probably would have become a raving Burzum maniac if given half the chance, but just stuck to Blind Guardian, Magic the Gathering and Everquest to be safe. Truth be told, the Germans are one of those bands (alongside Primal Fear and HammerFall) that created a rift through which all manner of fresh young faces appeared, as if power metal (and traditional metal) itself had not already been around for decades beforehand. This is not a 'get off my lawn' statement. No, this is the power of Blind Guardian's theme and music.

But the question brewing on everyone's mind had to be: how do you follow up a effort as brilliant as Nightfall in Middle-Earth? Perhaps the perennial power metal concept album, it left scars on the heart and dreams of an ancient, other world on several generations of fans. Blind Guardian's answer was A Night at the Opera, named for both the classic Marx Brothers film and the 1975 Queen album of the same name, coincidentally a massive influence on this band's love of operatic vocal harmonies, multi tracking anthems and spiritual bombast. I'm surprised more people don't make this connection, even when the Germans have made it only too plain to see, but they had been working wonders within the influence for years. This was the last studio album for drummer Thomas Stauch, who was growing disheartened by the band's direction (on both Nightfall and this album) and decided to break off to form a band that mined the inspiration of the early 90s Blind Guardian sound.

My dreams for another fully realized concept album would not come to fruition here, as A Night at the Opera returned to the band's earlier practice of bandying about several subjects through history, mythology and genre fiction. There's a big influence from archaic literature, in particular the Greeks and the stories of the Bible. Sure, it's not The Silmarillion, or the full-fledged Dragonlance concept album some dorks were crossing their fingers for (to whom B.G. does throw a bone here), but the songs and sources are, as always, interesting and make for wonderful imaginative fuel to the band's writing.

"Precious Jerusalem" christens (haw haw) this album with a blaze of thundering, tribal percussion that weaves into melodic grace as the tweaky little leads flush and flow throughout the ancient architecture of the track's titular holy city. You will immediately notice an even more digitized sound than on the previous two albums, and to a small extent this detracted from my enjoyment, especially with the almost constant whining processed guitar tone overkill on several of the tracks, that left me longing for that earlier, speed and power crunch of the old days. However, the band must have deemed it necessary to create such an intricate lattice of compositional elements, and in all fairness, the songs of this album are still extremely song.

"Battlefield" is one of my favorite tracks on the album, a raging and inspirational piece which touches close to home, as it is based on the tragic German lay the Song of Hildebrandt. This one is beautiful, in particular the amazing chorus which first arrives at around the minute mark and then parts into an epic sequence of vocal hooks and ringing atmospheric guitars which sound worthy of some epic film or television score. "Under the Ice" is another stunner, a mesmerizing vortex of atmospheric speed metal, with a beautiful verse, and emotionally wrenching chorus. This is one of the Greek elements to the album, relating to Cassandra after the Trojan War. "Sadly Sings Destiny" opens with a poppin' hard rock riff, dowsed in the super processed squeal of the modern B.G. guitar tone, and takes a pretty unique view on the crucifixion of Jesus. I do enjoy the slow, steady climb of the track towards its soaring backing vocals, and the bouncy little guitar melodies near the close.

"The Maiden and the Minstrel Knight" is another elegant ode to Blind Guardian's own national past, based on the Wagner opera Tristan und Isolde (itself based on the von Strassburg romance). It's a slow builder, powerful and pretty, though perhaps not as striking as other tracks on the album. Anyway, next time you bring that cute nerdy girl (or boy) to the joust, play this for her/him and it may initiate a joust of an entirely different order. "Wait for an Answer" is actually an original tale written by Hansi, about the friendship of two unlikely woodland creatures in the face of a grave danger on black wings. It's very Watership Down, and a nice touch to the album, especially when the music is this good, almost on par with "Battlefield" and "Under the Ice". "The Soulforged" is a solid tune which builds a dangerous and glorious atmosphere, true to the character on which it relies, that is the twisted, ambitious wizard Raistlin Majere of the Dragonlance novels (in which the ideas are superior to the writing). It's not one of the album's finer moments, but earns its place with a desperation hinged to its constantly wailing melodies, which are like the new bagpipes as they brazenly smack you in the ears, over and over.

My body fails
My soul will (rise)

"Age of False Innocence" is a nice prog-rocking ballad across a smokescreen of moody synthesizers, a tribute to the great astronomer and philosopher Galileo Galilei which erupts into a chugging force and then the expectant melodic storm, graceful enough that you can close your eyes and picture the swarming stars as they converge about Galileo's revolution in thought. The operatic chanting is a nice touch where it appears. Next, Blind Guardian tackles another famous historical figure, Friedrich Nietzsche, and his mental decline, with "Punishment Divine", another of the very best songs on this album, very loyal to the band's raging speed metal roots. Despite the wealth of annoying pop & squeal guitar at some of the tracks' climactic moments, there is a power and mystique which truly honors the philosopher.

Assuming you don't have one of the several lingual versions of "Harvest of Sorrow", the album then closes with "And Then There Was Silence", the 14+ minute epic of the Trojan War drawn from the inspiration of Homer and Virgil. Most had already heard this on the single the year before, but it's a decent balance of powerful moments and playful tragedies, serving as a semi-narrative through the heights and falls of the dreadful war. There are some moments of brilliance within the track, like the early driving mutes around 1:00 or the inevitable, climactic chorus vocals, but I do feel it rambles on a little long.

A Night at the Opera is another excellent Blind Guardian effort, with over an hour of material. The tracks here are longer than most previous albums, in part to make up for the myriad of tiny segues that made up a fraction of Nightfall in Middle-Earth's bulk, and in part to absorb the listener into each of the distinct stories of the album. Though the squealing guitars can grate on my nerves after a spell, it would be foolish to infer that the rest of the album sounds anything less than cosmic, especially when you think how much effort went into all the tracking...I mean literally, the band used 100s of guitar, keyboard and vocal tracks here, so think of it more like an orchestra starring a few of the same musicians (and specific parts) over and over. It's ambitious, and it's successful. Though one might derive from my lesser score that I found this something of a disappointment from the previous two albums, that is not the case. When this album shines, it shines just as brightly as Nightfall in Middle-Earth. But there are simply 2-3 songs here which do not stand out to me as much as the rest. Still, the fascinating subject material of each track and the great overall songwriting should earn it a spot in any metal fan's collection.

Highlights: Battlefield, Under the Ice, Wait for an Answer, The Age of False Innocence, Punishment Divine