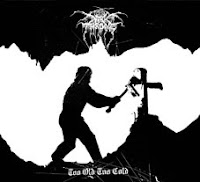 Released just over a month before Darkthrone's 12th full-length The Cult is Alive, the Too Old, Too Cold EP served as a satisfying teaser for the short span of weeks that led to that album's release. 75% of the material here is unique to the EP, if you count the alternate version of "Graveyard Slut", and while I tend to rue the shortplay format (in particular the single), there is enough value here that you should grab it if you are a fan and have a few bucks to spare; it was available as both a CD release and a limited 12" vinyl. One thing that strikes me about the material here is that it truly marks the band's evolution into a self-identifying mockery of trends and stupidity that had overtaken the black metal 'industry' by this point, with bands exploring all avenues of hybridization, fashion, and accessibility, while every one with a guitar, a basic computer set-up and a copy of Transilvanian Hunger had already been churning out homemade black metal recordings for years.

And thus begins the 'punk' phase of Darkthrone, which is still filthy, rotten to the core, and entirely loyal to their formative aesthetics, it simply rocks a little harder and makes you want to impale someone on your wrist spikes. The lyrics to "Too Old, Too Cold" are hilariously lowbrow and I might even say awkwardly awesome, but the song is oodles of fun, with a few huge black/rock riffs and a good old bendy, doomish traipse into the bridge section which is vintage early 90s 'throne. "High On Cold War" is the best exclusive offering on the EP, a raging black/punk piece with infernal Hellhammer grooves and a guest vocal spot from none other than Grutle Kjellson of Enslaved. What more could you ask for? I've often ruminated on just how cool an Enslaved/Darkthrone collaboration would be as a permanent fixture, and this is but a sampling, as Grutle's voice perfectly compliments the style. This track totally inspired me to start kicking things, as there were no politicians or religious figures about I had to settle for a brick wall.

The next track was completely unexpected, a rousing and filthy adaptation of Siouxsie & the Banshees' "Love in a Void", which had me slapping my knees it is so great. The vocals are a riot, yet strangely enough they feel completely compelling and loyal, and I like to imagine Siouxsie Sioux listening to this and enjoying it as much as any Darkthrone fan. Though the version of "Graveyard Slut" present on the EP is tagged as different than found on the LP, it's really not, aside from the vocals, which are far more blackish here than the Tom G. Warrior style used on the full-length. At any rate, this is a great song, dirty and smutty and dripping with underground credibility, one of the best on The Cult is Alive, so alongside "Too Old, Too Cold" it was enough to get the heart racing in anticipation.

I personally think this is worth having, at least for the cover tune and the Grutle Kjellson appearance on "High On Cold War", but the value is not extremely high, especially with the album to come rendering two of the tracks redundant. If there ever were a re-release of The Cult is Alive with the two unique tunes as bonus tracks, I'd advise you to pick that up instead.