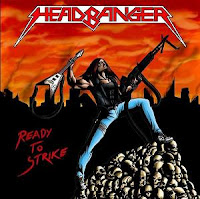 If you couldn't already guess from the cover art and the name of the band and recording, Headbanger are a speed/thrash act from Poland that like their metal old just like their clothing. There is of course, nothing inherently wrong with this, and thus for their second EP offering (which follows the Nuclear Devastation EP of 2008), they have written three tracks which honor the raucous, dirty speed metal of the 80s, specifically Venom and Kill 'Em All-era Metallica. Whether or not you will enjoy this depends on what expectations you build in advance for such a release. Headbanger is not up for trying anything new, simply satisfying their own desires, scratching the old school itch to get it out of their systems. If you desire nothing more, or can simply appreciate this music for what it is, you may find yourself smiling more than once and banging your head along to the band's passion.

After a hustling and brief intro led by the bass-line and some repetitious guitar wrangling, title track "Ready to Strike" seethes forward with a riffing pattern you have by time heard many hundreds of times. The 80s immediately come tumbling back into your memory, from Metallica to Piledriver to Raven and beyond, with the added charm of Devastator's slathering vocals which dowse the unbridled speed in a thick Polish accent. This I have no problem with, but the primary riff itself, while one of those 'eternally catchy' varities, is simply not more than a few minutes of effort to lay out with a rhythm section in the writing process, and there is no surprise waiting, or turn for the better. "Brutal Revenge" is only slightly less derivative, and to be fair, a superior song, with a real punk/street savvy that again recalls the early recordings of Metallica. "Speed of Light" seems to present a slightly more metal take on the riff from "Cat Scratch Fever", layering it in spiked leather gloves and manic 80s abandon.

And that is the Ready to Strike EP...a void of creativity where you would come only to bang your head, an act the band certainly encourages. There is a fresh, raw sound here which I rather liked, but the songs just don't give me anything I haven't heard 1000 times over, and there is no chance in hell I would pull out this album to listen to over any of its influences. Headbanger seem to have captured the spirit of their artistic ancestry, but without a slightly stronger spark in their writing, are destined only to be the footnote of a footnote.