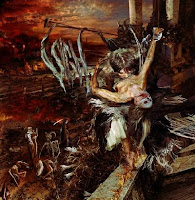 Scenes from Hell must seem like both a renewed revelation to fans who had desired an extension to the symphonic thrust of Hangman's Hymn, and a kick in the teeth to the eight people or so like myself who desired a return to the abstract and absurd sounds of Imaginary Sonicscape. In the end, of course, we both win, because what manifests here on Sigh's 8th full-length effort is a vision of Hangman's Hymn done proper, without the few filler tracks that album had and a far superior balance of the band's raw, blackened thrash/speed metal and the orchestral accompaniment. Where it's predecessor was a full-on blast of raging, racing hymnals to celebrate the raw human emotion and bestial spirit within, Scenes from Hell offers a more morose, ghastly picture within a wider range of tempos.

From the opening salvo of "Prelude to the Oracle", we are treated to a thick, bludgeoning guitar tone which works wonders alongside the orchestration, and the immediate connection in style towards the writing of Hangman's Hymn is evident, though the song seems to contain more subtle atmospheres that dawdle off against the backdrop while the multi-tracked vocals howl and hoot over the horns and swelling strings. The band's rawness is redeemed at around 2:20 when a skinny solo tone erupts over a rocking, 4 chord rhythm. "L'art de Mourir" starts cruelly with some old tech thrash riffing over some of Mirai's best vocals in years, and the change up before :40 creates some dense nightmarish volatility before the graceful symphony charges forward like a ballroom dance from the deepest levels of the inferno. "The Soul Grave" pummels through a jazzy organ strike and them some Wagnerian orchestration behind yet another forward momentum, in particular I like the ascending rhythms that transform Mirai's vocals into a squat, Japanese valkyrie.

"The Red Funeral" and "The Summer Funeral" offer two of the longer tracks on this album; the former lavished in a disturbing poetic intro alongside jarring pianos, before a quirky doomish segment which happily brings me back to the days of Scenario IV: Dread Dreams; the latter a bombastic funeral march, and while I really enjoyed some of the symphonic breaks and the overall atmosphere before the 2:00 point, there were actually a few times I found myself rather dulled by it. Not so for the frantic "Musica in Tempora Belli", which seethes in pounding footwork and descending guitar lines, with ballistic Mirai vox and a true attunement to the chaos inherent in some of their earlier works. The gothic, spoken word outro creates a fine bridge into the savage "Vanitas", which takes a few moments to escalate into a striking bridge with winding thrash rhythms that pounce like a leopard in the bush, and an operatic, symphonic punctuation. "Scenes from Hell" itself is the perfect little closer, an upbeat, rhythmic onslaught of the band's classic metal guitar melodies strung about a thundering folk rhythm that makes one want to laugh and duck at the same time.

One thing I enjoyed about Hangman's Hymn was the album's 'fun factor', that is, it made for a great time speeding around in your car, blaring tracks like "Me-Devil" and "Death With Dishonor". This record really follows suit, about 75% of the material is perfect for the same situation, but there is a slightly more noticeable edge to the writing which hearkens back to what I'd consider this band's 'golden age', 1997-2001. Still, even if this is not a masterpiece at the level of, say, Imaginary Sonicscape, it is dense and packed with Sigh's energetic discontent and creepy serial killer enthusiasm. It's an amazing effort which should have the legs to stand on until Mirai & company once again grace us with their diabolism.