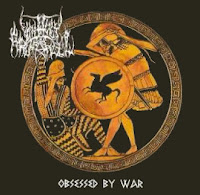 It's always exciting to hear a Greek extreme metal band write a conceptual album based on their own culture. In my opinion, this does not occur quite enough...with most of the better known bands only skirting the subject, but nevertheless, Unholy Archangel have unleashed an album here which pays heed to the ancient Greek city states and the god of war, Ares. The cover art and logo here are excellent, and the fact the band have been around for 13+ years are releasing their debut full-length after a number of demos, splits, EPs and compilations certainly builds anticipation. It also bears note that vocalist Iapetos 666 was a former member of Greek pagan black hearts Kawir.

Unfortunately, the concept and the few psychedelic or ambient interludes on this album are about the only thing Unholy Archangel is bringing to the table, because the black metal element itself is so damn noisy and turbulent that I could often barely make out the notes of the guitars. Whether this is intentional or not is moot; Obsessed By War is a shitstorm of blasting beats, grunting death vocals and noisy feedback which tries to pass as guitar and truly grates on the nerves. Since many bands today don't require any budget at all to produce decent sounding material, I can't really think of any excuse, save for the fact the band actually desired this entirely hell-fueled, raw approach the material. But it's not the lack of polish that does me in, it is simply the lack of memorable songs created by the muddle guitar tone. There are riffs here, and even melodies, but they become so mired in the disgusting distortion that you are hard pressed to discern them from the bleak surroundings, and the drums or vocals are not enough on their own to immerse you into the slaughterscape.

I would try and offer a highlight reel for this record, but aside from intros like the synthesized flutes of "Hymn to Ares", the warped electro pulse of "King War", or the narrated ambiance of εκ "δωδώνης μεμάντευται", there is not much worth mentioning. There are a pair of hilarious fast and blasphemous tracks, each only :12 long, titled "Behold the Nuclear Thunder of the Almighty Lord Zeus" and "The Prehistoric Invasion of Hellenes in India under Dionysus Command", and the obvious gimmick here is that you can listen to the song in less time than it takes pronouncing the title, but I can't qualify them as good. Perhaps the best of the rambling, full-length metal tracks would be the closer "Stench of judeocrhistianism", which somehow manages to conjure at least some level of sonic architecture, though I still hated the guitar tone.

I enjoy a challenge every now and then, and I enjoy raw black metal performed at its most lucid extremes, but Obsessed by War just doesn't offer a glint of hope that would shift my disposition. Considering the very limited pressing through a label known as Kill Yourself Productions, and the utter impulsive nature of the blasting, growling sounds within, I'd have to assume the band meant for this to appeal to only the most insane, horror groping fiends who wish for the most vile and destructive music on the face of the Earth. I'll grant the band that. Often I'd count myself among such malefic forced, but at heart, I'm still a metal guy...I like good guitar riffs, great atmosphere, and good songwriting. This album fails at 2 out of those 3, and only teeters on having an atmosphere worth mentioning.

Highlights: everything up to actually hearing the album.