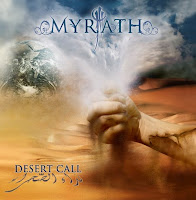 There aren't a lot of progressive/power metal bands out there these days that I'd ever pay lip service to, aside from the established acts like Angra, Pagan's Mind or some of Dream Theater's work, so I was quite surprised to hear a band, from Tunisia, of all places, that blew me away with the quality of their songwriting, musicianship, and the excellent collision between Arabic instrumentation and accessible metal hooks that run the range from balladry to aggression. If you really had to pinpoint their sound, you could think of them as a happy medium between Angra's first few albums, Symphony X, and the Middle Eastern savvy/folk awareness of Israel's Orphaned Land. Myrath has an innate ability to conjure a mystique through their compositions that very few other bands can muster, and the title to the album is no jest. This is about as 'desert' as you can get within this genre.

I would like the state that if you are not a fan of this brand of metal hybrid (i.e. the bands I listed above), then Myrath is highly unlikely to change your mind, so there is the door, and please move through it towards the thrash or death metal chamber or whatever else you came for. But if you've an open mind, or a fondness for power metal that is more rooted in ethnic sounds or progressive rock leanings than a Germanic storm of anthems and fist in the face riffing, and a fondness for great, clear as rain vocals, then Myrath has your ticket waiting. Zaher Zorgatti is quite the find, a quality singer who can shift between English and nis native tongue with no restraint, and some of the more fascinating moments are when he decides to use a drifty vocal tone that seems to dance about the desert sands, as they sweep through the ages, covering and uncovering their secrets.

As you will hear with in the first few minutes of the excellent "Forever and a Day", he is not the only treasure within this band. Malek BenArbia has an approach not unlike Michael Romeo of Symphony X, but with a thicker, stronger tone, and an ability to distinguish his riffs in each song, that they never become outweighed by the keys of Elyes Bouchoucha, which are admittedly responsible for much of the atmosphere of the album. Anis Jouini and Saif Ouhibi are a tight and diverse rhythm section, creating a tribal impact that anchors all of the various winded melodies that scurry about the day's heat like the falling feathers of the rukh. This track alone gave me more enjoyment than most entire power/prog metal albums I hear...and it's just the tip of the...I guess an iceberg does not apply in this climate. "Tempests of Sorrow" adopts a punching, lumbering groove beneath the choppy percussion and native strings, while Zorgatti's voice wanders like a ghost seeking water in the wastes. "Desert Call" is another masterwork, synths weaving their way through the mesmerizing guitar hooks, and Jouni's bass really standing out in the pre-verse, before the mystic, minimal chug and synth take over.

Beyond this, "Madness" rages with its flanged opening guitar lines, swelling horns that strike at you like an assassin from the dark pages of the 1001 nights, and great choral vocals which imply the darkness ahead. The squawking tone of the guitar that initiates "Silent Cries" sounds lovely with the tribal percussion and the slowly ascending keyboard line. After five straight pounders, the band lets us breathe with "Memories", a prog rock ballad that would probably sound lame if it weren't in some crafty hands...yes, it is nary and drippy sweet as any of Angra's old softies, but the instrumentation dazzles and it rivals even the most perfunctory male-fronted pop in your collection. The title is of course, completely generic, and the lyrics are hardly enlightening, but the presentation is sound, and the generic songtitles are perhaps the only complaint I cand launch at anything on this album...

After the breath of desert air, the band returns to the hard stuff through "Ironic Destiny" and "No Turning Back", both of which titillate, in particular the percussion that runs below the intro of the latter, and the very Angra-like use of the keyboards. "Empty World" is kickass, especially how the guitar chugs out before the :30 spot, and the ascending vocal melody of the chorus, which escalates even further into a driving power guitar line and nicely shredded solo. "Shockwave" is the closest you might find to pure power metal, though it still features some proggish synth work that builds the atmosphere to the synth arpeggios...this particular track reminded me of a band like France's Heavenly at their strongest, and the lyrics are...well...kind of about 'the rock'.

Really, if you like any of the bands I name-dropped in this review, then you need to check this out as soon as possible. Not only is it professional, but it's almost entirely memorable, clearly one of the better bands to EVER incorporate the Middle Eastern vibe into their songs, no mean feat when their temperament is no modern. I apparently missed their first album Hope from 2007, but now I've got all the more reason to track it down, for Desert Call delivers on nearly every count aside from writing inspiring song titles.