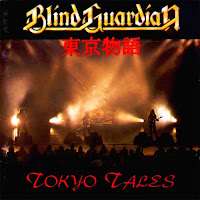 Like most musical artists/trends of quality, Japan had the good sense to pick up on Blind Guardian quite early in their career, importing them for live shows as early as 1992. Mind ye, this is back when almost no one knew who they were, and they had yet to become synonymous with the terms 'power metal' or 'Tolkien metal'. Tokyo Tales is a recording culled from two shows the previous December, at the Koseinkin and NHK Halls in Tokyo. Though it was still the early days, the band had already released four albums, so there was quite a wealth of material to choose from for the set, and they've put their best foot forward in some of the selections, with a few questionable entries.

The sound is crisp and powerful, reflective of the band's early status as an emerging speed/ power metal band with Hansi's fantastic, melodic vocal delivery. He's got all the bite of his better days, and here was also playing the bass guitar. The rest of the 'classic' lineup is present: Olbrich and Siepen on guitars, Stauch on drums, and Marc Zee guesting on the keyboards, with most of the band contributing the backing vocals as usual. Everything sounds level here, and I'll go as far as saying that Blind Guardian are one of the few bands I prefer live than in the studio (this will be a more pertinent fact in their later years. You can hear the hiss and roar of the crowd just right, but being a Japanese concert, it's not the overbearing, drunken response you get in a lot of other countries (which often freaks out some bands).

Listening t0 Hansi between songs can be awkward, especially his monologue before "Journey Through the Dark", but at least the track itself sounds blistering and exciting, with the same intensity it emits in the studio version. "Banish from Sanctuary", "Valhalla", "Traveler in Time", "Welcome to Dying" and "Time What is Time" are also favorites on this recording, each sounding as if it were truly written for the stage. The band also performs "The Quest for Tanelorn", "Goodbye My Friend", "Majesty", and a rousing version of "Lost in the Twilight Hall" to close out the album. But wait, Blind Guardian have also deemed to include a live edition to their cover of Barbara Ann...which is as expendable here as it was as a studio idea. It's not that the band cannot handle the song, as this is complete with blazing piano solos, tight backing vocals, etc. It's just...lame?

Now, I'm not a man who usually cares for or purchases live albums; those few that I own include the likes of Live After Death and Unleashed in the East. But Blind Guardian is such a good live band that collectors and fans who 'couldn't be there' would probably do well by purchasing this output, especially this and the 2003 Live album. Tokyo Tales sounds pretty good, and I often listen to some of these versions of the songs in place of the studio counterparts (especially for material off the first two albums), except of course the dorky cover which could have been omitted on this release in favor of another great original.

Highlights: Banish from Sanctuary, Journey Through the Dark, Valhalla