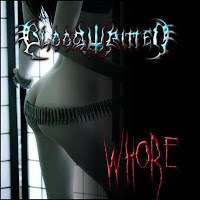 Poland's Bloodwritten have released this free for download EP as they seek out a label to release their third full-length album. Having gradually morphed from a black metal artist into a filthy thrash metal band with black vocals over their past albums, Whore continues along the path set by many Swedish artists such as Raise Hell, Bewitched, Witchery, Maze of Torment, and so forth. Primal and sexy violent riffing that doesn't reinvent the wheel, but allows for a solid 14 minutes of neckbreaking escape.

The base influences are pretty easy to pick out: Destruction, Kreator, Slayer, Sodom Venom, Bathory, Razor, and Possessed; but while Bloodwritten has the energy and vitriol to honor these with their thrust and jab rhythms, they never really build up a song to the level of truly memorable. The two new studio tracks, "Whore" and "Bullet Overdose" traipse along at high speed; the former is slightly catchier for its ascending melodic bridge and a decent breakdown rhythm, but the latter isn't bad either. There is a live of "Taste Insanity" from their 2008 album Iniquity Intensity Insanity, which sounds like it would have been a lot more fun in person than it sounds here...but still true to that fast paced, black/thrash grit. The EP is closed off with an instrumental demo for a track called "Return to Tortuga Bay", with mostly average riffing that also suffers from a lack of vocals (though I'm assuming they will appear for the final version).

It's hard to be down on a free release like this, which at least suits to show bands the direction the artist is headed. It's not something that would be worth the money, so the decision to share it is wise. I didn't care for the live track or the instrumental demo, but the two studio tracks showed the potential to at least seduce the black/thrasher with crushed beer cans, violent if straightforward speed/thrash rhythm and the fantasy sexy bullet belt-slewn ass. You can grab Whore through their MySpace profile.