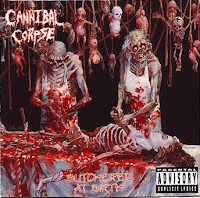 And so the masters of carnage sought to surpass themselves in the category of butcher block, and so they did succeed...more or less, in digging for a deeper, darker tone and penning an even more repulsive set of lyrics to shock the death metal aspirant, who at the time was still trying to contend with the fact that his beloved thrash metal had been mutated into such a monstrosity, sweeping the country and the world in a haze of nihilistic, grotesque orgies. The problem is, Cannibal Corpse managed to write an album here that, while surpassing Eaten Back to Life in extremity, is somehow even more boring in retrospect, with very few riffs of note that I would ever specifically seek out for any fix. This is truly one of those records you will remember simply for its sickness and disdain for the vitality of life, and never really for anything bordering on musical merit, unless the only merit you seek is the chugging groove of bland USDM.

I'm afraid "Meat Hook Sodomy" is little more than a pretty name; because once you've gotten past the wall of guitar noises that introduce it, there is nothing more than a frenetic but uninteresting riff that swerves into a dull chug-a-long. At around 3:00, a Death-like, old school rhythm erupts, but the note pattern is simply not that interesting. "Gutted" struts along with another chugging rhythm that is nigh indistinguishable from many others the same band has written, not to mention the dozens of would-be's that were releasing albums at the time. "Living Dissection" is all too redundant, with yet another chug-chug-chug-chug-chug-chug that morphs into a half-decent, if forgettable old school rhythm. I'm probably giving the impression that I have some beef with the palm mute in metal, which is totally not the case, it's just too often that I hear this type of breakdown riff executed without any sense of taste or catchy rhythm, and these early Cannibal Corpse albums are some of the original culprits to spawn a gajillion lifeless copies that seem to believe that simply chugging and down-tuning a guitar makes an album automatically heavy. There is nothing heavy about being bored.

Reflections of things to come, mirrored in the dead
one's eyes my fantasy of murder
Incarnated open wounds gushing, blood on skin
coagulated tortured of the retched

And so this pattern continues through a great deal of the remaining six tracks. "Under the Rotted Flesh" weaves a morbid atmosphere through some creepy riffs akin to Obituary, but it builds up to nothing, there is just no payoff aside from a few more typical bottom feeding riffs that lead into an exploding lead. "Covered With Sores" opens in a dull, bluesy death groove but soon transforms into the same slushy sort of spastic rhythm that occupied "Meat Hook Sodomy". "Vomit the Soul" has a great title, but more of those faceless riffs get lost in the shuffle and are difficult to discern from so many others. The title track is a little more technical and punchy, but by the "Rancid Amputation" arrives, I'm nearly falling asleep since it seems unlikely there will be anything of note to round off this album. "Innards Decay" strives to prove this statement false, and granted it's a lot better than most tracks on the album, with a killer warlike chug at :30 that again recalls Obituary, and a finale which borders on crawling death/doom.

Listening to Butchered at Birth is something like staring at a wall, or a zen rock garden. You seek a deeper pattern of meaning or enlightenment through its architecture, but whatever the stone or brick or branch reveals, this album does not. It's a pedestrian brutal bludgeoning effort which accomplishes little more than to reflect the callous indiscretion of a moldering corpse, the bleak face of death unflinching as the 5 men from Buffalo play around in your guts and organs, stopping to take a bite here or there if they think you will be tasty. Is it terrible? No. And neither is it important, especially from a band like this who clearly has what it takes, and will prove this in the latter half of their discography.

Highlights: waiting for the bonesaw to descend and cut you free from this ennui.