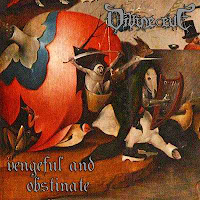 Divine Eve are a texas outfit known best for an EP they released through Nuclear Blast records in 1993, As the Angels Weep. After a lengthy hiatus, the band reformed in 2008 and now, 17 years after their first EP, they have released another through Ibex Moon. I will admit that I was never very fond of the original EP, and not party to the cult status that developed about it (as is often the case when a band releases something through a larger label, builds some buzz quickly in the underground, then all but disappears), since to my ears it was very basic death/doom without much in the way of compelling riffs or truly despairing atmosphere. Vengeful and Obstinate is actually a little more interesting, though of the four tracks, there are only 1-2 I would revisit.

These guys are another band highly influenced by the legends Hellhammer/ Celtic Frost, though they tend to reach for a more grind ethic when they write faster material (and faster for this band is still relatively mid-paced), and despite the thicker vocals, I am also reminded of the death/doom roots of other bands from the early 90s like Tiamat or Darkthrone. When this EP actually evolves into layered classic metal riffing in place of its simplistic doom rhythms (which don't sound like they involved much commitment in writing), I actually begin to grow fond of it, but there is simply not enough in the end...

"Whispers of Fire" opens with a sample of crackling flame and then a grinding rock rhythm which again conjures forth the influence of Hellhammer; toss in a sporadic lead and a nice old school Slayer-like riff in the bridge, and you've got a half decent lead-in to this new material. "The Ravages of Heathen Men" has a nice, deep horn that precedes and later joins into a slow, winding doom riff, a bluesy but evil lead erupting before the diabolic verse, which is actually pretty good for something so primal, and I would have to say the best song on the EP.

"Vindication" must feel like a very personal message from the band, after such a long, dry spell and so many other bands coming along to ape this style, and the riffs have the same bombast as the German Horned Almighty, though the production here is simpler and fuzzier, and just not as catchy. "Grievous Ascendance" was a lot more in depth, a trudging, morbid tune through which cymbals swell and the vocals take on an almost narrative pattern along the verse, over a riff that reeks of pure Sabbath worship. The slow lead guitar melody is quite nice, as it rolls back into the four chord bridge which is heavy and subdued like an older Obituary track ala Cause of Death.

I won't say that I've been converted, as this material will probably pass from my memory just as quickly as their old EP, but there are certainly worse bands to kill 17 minutes with, and if you find yourself fond of modern death/doom sounds like those of the band Runemagick, I could certainly see how you might develop an attraction for this sound. The horn and leads are the most atmospheric moments of the release, and the best, so it would be nice to hear them delve even further into this style if they ever muster another recording, in particular the purported full length they are currently scribing. Vengeful and Obstinate doesn't rock the boat, but it does rock for at least the first two tracks, then gradually becomes less compelling.