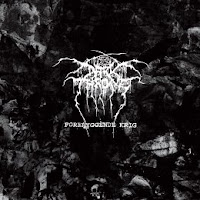 Forebyggende Krig was a 7" EP released in a very short quantity, which you had to pick up online, and it's another of the more worthless turds festering in the Darkthrone backlog. The title track was already available on The Cult is Alive, so that leaves us with only a single track of note, a cover of "Bad Attitude" from the New York punk outfit the Testors, which is under 2 minutes of music for your consumption. It's not as if this thing was expensive, and most people simply downloaded it elsewhere, but this is the type of release I just can't feel myself get behind. Why even label it as a 'release' at all? Just toss the track on a tribute compilation, or as a bonus track to an album, or offer the song completely free for fun.

At any rate, "Forebyggende Krig" is a solid anthem which was the final track on The Cult is Alive, a big, bludgeoning groove that ended in a slew of bluesy solo licks and had a wonderful slaughter house vibe to Nocturno Culto's vocals. The album brings back a lot of memory for their first few albums, a little edge of doom/death to the proceedings, but it's a little tighter and cleaner as well. I am not very familiar with the Testors, perhaps that makes me a fake punk, and not a hiking one, but though I like the Darkthrone cover with Fenriz' hilarious clean vocals, the chords are your pretty basic progression which must have seemed commonplace if you were into the Ramones, Fear, The Damned, Misfits, or other great punk of the late 70s/80s.

Perhaps one day Darkthrone will clean house and just release a compilation of every cover they've recorded, with a bunch of new ones for extra value. That is something I would spend money on, but at under 2 minutes of exclusive material, this is nothing more than a promotional snippet with the cover tossed on.