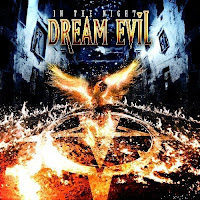 When it comes to a band like Sweden's Dream Evil, I've always been of two minds. The first mind is that they play a pretty fair quality brand of power metal, with a loud and proud polish, talented musicians, decent vocals, and a wealth of experience which helps translate their old school intentions into the modern world. The second mind is that they are another band who are almost entirely void in the creative department. That is to say, they are simply content with re-hashing the same old stupidity that might have felt novel in about 1983, but seems reluctant and redundant by the 21st century. I mean, just how many songs can we have out there with the titles "Bang Your Head", "Mean Machine", "In the Night", and "See the Light"?

I understand the band's disposition towards glorifying and reliving the good old past of heavy metal, but for Christ's sake, put a little time and effort into more than just the music for once. I may have given the band a by for Dragonslayer or Evilized, since the idea seemed a little fresher at the dawn of the century, but by now it's just tired, and all the HammerFalls and Dream Evils of the world could do a lot by simply upping the ante in their lyrical development. So by now you can tell the absolute dregs of this album are the lyrics, many of which are atrocious tributes to the very style of music they play, and not even in a clever or sarcastic or funny way like some other bands do (for example, the Armour debut, or the over the top absurdity of Abigail or Metalucifer, which is so insane that it cycles through shit into diamond).

Just like lightning strikes a fire IN THE NIGHT.
Metal is the only way
The devil's sign confirms you're ready for the fight
Built to last and here to stay. It's electric!

For one thing, you do not worship the devil. For another, WE GET IT. You are playing heavy metal music. Fight and kill for metal because the stereotype of metalheads being a bunch of sodden, beer-swilling jackoffs with an IQ of 12 is the one we REALLY want to last forever! Seriously, there is tongue in cheek, and then there is foot and mouth, and Dream Evil are wasting a fine pair of boots here to massage their tonsils with these awful lyrics. Now, I should be fair here and admit that not all the writing is quite so lame. That isn't to say the lyrics are ever good, but they often focus on other generic elements like wind and power and skies and the remainder of the power metal drivel we've all heard a thousand times.

Yes, those are actual lyrics...from a track called "The Ballad", which I suppose was titled for a sense of the profound. That is the level of humor we're working with...

Having already given myself a stroke over the lyrical content, I'm now going to admit that musically, the band is just as explosive and energetic as their debut, and quite talented at crafting simple riffs and blinding, melodic leads that will certain grasp your attention. The band still features three of its original members: Fredrik Nordström, Peter Stålfors and of course Niklas Isfeldt, whose clear and cutting vocals have truly become the mainstay for this band. His performance here is top shelf. You've got a few of the more thundering tracks here ala "Immortal", "Frostbite", "Mean Machine" and the raucous "Kill, Burn, Be Evil", which all have their moments in the spotlight, rocking fierce and hard even despite the derivative riffing which dominates them. "On the Wind" has a great melodic hook, like a Maiden with a lot of crunch, and reminiscent of older Dream Evil 'classics' like "Children of the Night". But of all the tracks here, it was probably "In the Fire of the Sun" that had me rocking the hardest, laid back and melodic but hard hitting like something Riot might have written.

I can only imagine what the results might be if Dream Evil ever got off their duffs and composed some great lyrics, maybe even a concept album about something other than heavy metal itself... Their musical delivery is 100% professional, accessible and could earn them airplay just about anywhere that hard rock and metal still survive, and the songs are generally somewhat catchy. But, no matter what their intentions (and I am sure they are probably innocent), the lyrics here are simply awkward and embarassing, and represent only the dumbing down of an artform with few limits when properly applied. I'm all for having some cheese with my crackers (see my Metalucifer reference above), but replace that cheese with manure and they become a lot more difficult to digest, or even desire to begin with.

Highlights: In the Fire of the Sun, Frostbite, Immortal