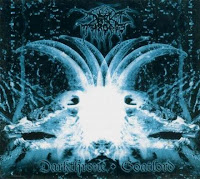 Goatlord is actually one of Darkthrone's more interesting releases, not for the inherent quality of the material but for the history involved. Essentially, this is the album that would have, could have been the followup to 1991's Soulside Journey, so the material you will find here is much akin to their early work, raw death metal with a little groove and some influence from the obvious parties (Celtic Frost, a little Death, Autopsy, and so forth). The tracks to this album were rehearsed but later shelved when the band decided to alter their course towards the emergent black metal (if you've got the Frostland Tapes compilation, you can hear the entire thing in its original, instrumental form). In 1994, it was decided that Fenriz would record some vocals (with a little help from some friends) and release the material as a sort of posthumous 'rehearsal album' through Moonfog, and I for one am happy they did, as this is sort of a treat.

It's a messy treat though, like getting that half-melted ice cream bar from your creepy uncle, trying to grin and bear it while you halfheartedly consume the thing, wondering what he might have slipped inside it. But a treat nonetheless! Of course, as this is basically a rehearsal with a few cheaply added vocal tracks, you will have to deal with the concessions. There is a nice, bruising, raw guitar tone here which sounds at best like a tight live performance, but the drums are as tinny and the bass as plopping as you would expect from an old soundboard. Since the vocals were added later, they seem to exist in a realm all their own. You've got the standard Fenriz rasps, his manly, oddball crooning, and even some 'femme' gothic opera vocals which at times sound like King Diamond. Supposedly, it was Fenriz who did all of these vocals, though there are some backups from Satyr.

Not a lot of people have given this release a fair shake, and through my first few exposures, I can kind of relate. But once you accept it simply for what it is, and not what you were hoping, you will find that there is a lattice of rather mesmerizing, grooving riffs that were written here which probably could have made for a killer album with the band's older, death metal vocals and a studio production akin to Soulside Journey. If they were one day to reincarnate this material and give it a proper treatment, I would actually buy it again, but then I'm not at all disappointed with the currency I blew on this the first time around.

"Rex" opens with a frilly speed picked death line, and while you get the impression the track will run off at this speed, it actually turns into a stubborn groove which drifts through a number of pretty cool riffs, often bordering on a stoner death hybrid. "Pure Demoniac Blessing" would have been a perfect fit for Soulside Journey, though the melody stops and starts and Fenriz' cleaner, dreary vocals feel incredibly corny over the doom verse. However, when it reaches into its chest and pulls free its death metal heart, I am quite reminded of an old Death-like atmosphere, ala Leprosy. The vocals are a little wild, like a plaster of schizos recorded sessions with their shrink and simply 4-tracked onto this old recording. But you'll have to get used to them if you're going to listen to this album.

"The Grimness of Which Shepherds Mourn" starts with a big Celtic Frost rhythm, and Fenriz even goes so far as to purportedly ape a high-pitched female vocalist just so it might sound like something from Into the Pandemonium. Personally I enjoyed it, there is this uncouth pleasure to be had from a song like this, and if it was being performed before me I would be banging my head in between opium hits with the best of them. The bass is so thick here that it borders on the post-funk of Les Claypool during the bridge. "Sadomasochistic Rites" is vile and evil death/doom, crawling forward under some of Fenriz' sickest vocals ever, while he wails against himself like a morbid ghost lost in the woodlands. "As Desertshadows" has a deeper guitar tone than the previous tracks, one of the tracks which bears the most semblance to Soulside Journey, with the added 'female' operatic vocals, and there is this great, dark crawling passage before 2:00 which would have slayed on either that album or one of the earlier Paradise Lost records.

"In His Lovely Kingdom" has a grim atmosphere of writhing, melodic death which crashes forward over the double bass, picking up speed into a bleeding guitar line for a brief second before yet again morphing into another of the band's death/doom segues, this time a hybrid of Sabbath and Death. "Black Daimon" is the perfect ritual death rehearsal, with a variety of vocals that all work in conjunction like a chorus of paranoid schizophrenics. I love the catchy old school Death hook in this, and the end cycles through a painful doom crawl to some grinding death. "Toward(s) the Thornfields" is excellent, painful death/doom which would probably have Cathedral dripping with envy, and "(Birth of Evil) Virgin Sin" feels like a simplified, stretched out warmup for a Demilich recording. "Green Cave Float" is one of the better regarded tracks from the album, a lurching melodic groove that mutates into simmering death grizzle....it's really, really good, even when the femme vocals arrive, it's like a procession of lost souls trying to escape a labyrinth of ancient, crushing stone and slime.

I'm going to say this: if Goatlord were recorded in a proper studio and released in its intended form, it would today be another album hailed in the same regards as the early works of My Dying Bride, Anathema, Paradise Lost, and maybe the debut from Amorphis. I.e. a death/doom metal classic. There are a great many quality riffs here, the only problem with this particular recording is the vocals stand out, but I'm not sure how else they would have done it due to the disparity in the sessions. Anyone who is listening to this and expecting to hear the Darkthrone black metal that they are used to is wrong, I mean, read the fucking liner notes...or do a little research before you buy something. At the same time, the vocals here can be a little distracting, and perhaps Fenriz could have reined them in so they'd match the more serious nature of the music itself. The lyrics here are not the best of Darkthrone, but consistent enough that you wouldn't find them cheesy if not for the means by which some of them are delivered. But in general, I like all the voices the guy is doing, it's just a matter of them standing out so far in the mix that it becomes obvious they come from two different eras.

So where does this fit in? Well, if you're a fan of Soulside Journey, I heartily recommend buying this, because it's quite enjoyable. If you're a production whore, avoid it, and honestly you'll probably also want to avoid most of the band's releases, since they do not exactly practice the studio sterility of the modern metal world even when they go at it with an actual budget. This is some surly, memorable old school death metal which, despite its bizarre format, manages to succeed where so many have failed, at crafting the creepy hooks and atmosphere which should always beat at the black heart of the genre. As far as the means by which it finally surfaced...hell, I wouldn't mind more bands attempting this type of release.