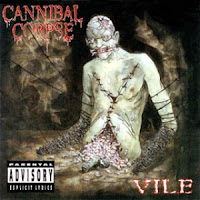 After parting ways with Chris Barnes, Cannibal Corpse sought out and found a more than capable replacement in George 'Corpsegrinder' Fisher, who had previously fronted Monstrosity for their first two albums, not to mention his own, self-titled project. The immediate difference between the two styles is that Barnes operated on a 'growl cop, snarl cop' routine, where he would generally offer his blunt dictation and then switch up to a different 'character', the snarling and bestial sort of vocal that sounded quite silly emanating from his particular throat. You could say it was the Carcass method. Fisher, on the other hand, travels between the two styles in a single breath, with a voice slightly higher pitched, and less gruff than Barnes, but a wilder energy that sounds superior when paired against the lyrics.

I realize it might seem silly to compare death metal grunters, but you have to know these things in my line of...hobby. At any rate, I immediately took to Fisher's style moreso than I had ever had for Barnes, though the former frontman had his moments (certainly he was great on The Bleeding). Unfortunately, while Fisher's performance was more than adequate for his debut with these brutes, the music here feels a little mired and mixed. It's a solid offering, and a great setup for their following work (the excellent Gallery of Suicide and the flawless Bloodthirst). I'd even go so far as to say that this was the same raw creative matter, later given flesh, and though I enjoy only a few songs in retrospect, it does form a natural bridge between where the band was at 2 years prior and the glorious, gorebound future that lay before them. Gorebound. Is that a band? I guess it's only a matter of time now.

Another important detail when looking back on Vile is that it was the first death metal album to ever debut on the Billboard charts. Of course, this is more a testament to the fact that band's sell albums on name alone, since Vile is nowhere near the most deserving of Corpse's albums to achieve such a level of success, and even with all the promotional power of their touring, cover art & lyrical controversy, it was still pretty low in the ranks, sad proof that death metal (and real metal in general) were truly niche in an era dominated by confused shoegazing grunge rock and piss poor radio friendly pop punk.

It's a little complicated to figure out why exactly I did not explode over this album, as it carries forward the technical prowess of The Bleeding with a better vocalist to match the band's progression, but I must chalk it up to a simple lack of connection between most of the frenetic riffs and the synapses in my brain bred to accept its brutal impulses. "Devoured by Vermin" is a frenzy of guitar work which pummels by at the speed of a cadre of the titular rodents fleeing a sinking vessel, thus transforming into a low down dirty mosh fest and some intense, if brief, solos. "Mummified in Barbed Wire" benefits from not only a killer title, but some frantic choppy rhythms which sound like a ginsu chef hacking away at his meats and fish while simultaneously sniffing coke and popping tabs. Still, the breakdowns within this song do little for me, simply passing from one flurry of barbarous axe acrobatics to the next. "Perverse Suffering" is simply dull, though it explodes through a churning vortex of aggravated assault, none of the riffs really stick. Not so for "Disfigured", which has a great tech-death-thrash rhythm highly reminiscent of the first Pestilence record Malleus Maleficarum, and in the end stands as one of the better songs here.

"Bloodlands" smashes forward like a bloated, undead killing machine, by which I mean it's slow and extremely groovy, deconstructing the band's faster rhythmic action to a crawl, with some interesting results. "Puncture Wound Massacre" and "Relentless Beating" both scream past with some meat-headed thrashing riffs that should please an advocate for shear speed, but neither really sticks past the first listen, with the possible exception of the intense guitar bridgework in "Beating". I did rather enjoy "Absolute Hatred" with its concrete and clinical riffing, melodic misanthropy morphing into a start/stop onslaught in the center of the song before the wild leads erupt over a great, thrashing foundation.

"Eaten from Inside" is another of the album's pleasures, gunning for an early lead which transforms from alien mystique to shrill noodling, prior to the verse rhythm pulling a grooving low end trill that would make Bleeding fans proud. The middle of the track does border on dull, but it comes around to another great lead/rhythm before 2:30. "Orgasm Through Torture" opens with an interesting melodic pattern that continues on through the verse, but gradually bludgeons itself into mediocrity. Vile's grand finale, "Monolith", adds no insult to injury, but it too suffers from a mix of brilliant, frenetic riffing and less inspired filler.

Considering how close this album is in tone to its successors, it strikes me that even now I can not listen back and develop a serious appreciation. There are 3-4 great modern Cannibal Corpse tunes here that would make an extended playlist rotation on my iPod, and the rest I'd simply consign to an eternity of sparse visitation, like that creepy aunt your family shackled upstate in that mental health facility. You might break this record out for a rare spin, like visiting her on holiday with a fruit basket that her orderlies will probably steal and devour, but you will never want her back in your life full-time. And I feel that way about much of this 5th fateful album. But at least it brought them some limited financial success, and forged the path for Gallery of Suicide, which truly ups the ante for this long lauded band.