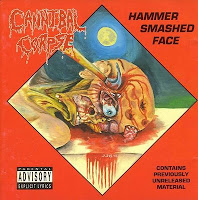 Sweet, sweet, capitalism, oh what you have done for the music industry, spewing galactic megatons of wasted matter into our environment that does naught but poison us and our surroundings. I picture a grim future where entire 3rd world nations are transformed into massive graveyards of CD singles, cassettes, picture discs, vinyl, VHS tapes, and so forth, all whisked into existence so the record label executives (and often the artists) can eat a fatter meal at a higher star restaurant. With Cannibal Corpse's emerging success in the 90s, it was inevitable that they would also be taken (or taking us) to the cleaners. I'll give them some credit though, any glance at their discography reveals only a few singles, and this early Hammer Smashed Face EP, which has since been rendered completely worthless.

"Hammer Smashed Face" is the same track you heard opening the Tomb of the Mutilated album one year previous to this, and though it's a decent one with a pounding rhythm and fairly 'tame' level of gore, it feels only redundant on a release with only 3 tracks (5 if you've got the alternate version with two other re-pressings). The remainder of this EP consists of two cover tracks, and likely the only draw for fans at the time who wanted to kick a few more dollars into the ditch these zombies crawled out from. "The Exorcist" seems a natural fit for the grisly New York barbarians, as Possessed was no doubt a formative influence on their decision to even play this style of metal. Chris Barnes bludgeons out the vocals, and the music sounds as you might expect, with a thick bass presence and some nice guitar tones for the bridge before 1:00, evoking the morbid old school atmosphere of the original. "Zero the Hero" is a decent cover as well, hearing the brutal spin on Black Sabbath is entertaining, and the track gets the same room to breathe as its predecessor. I should also note that the stoney vibe is like an omen of the future of Chris Barnes, who in a few years would be out of this band and writing stoner horror death metal until his heart is content with the lackluster Six Feet Under.

As if to create some sort of micro-anthology on the EP, the alternate version also features "Shredded Humans" from Eaten Back to Life and "Meat Hook Sodomy" from Butchered at Birth, adding no real value to the release save to extend its length. The two cover songs mark the first release for the band as a 4-piece (which wouldn't last long); Bob Rusay originally recorded solos for them, but Jack Owen re-recorded them after Rusay left the band. Since "The Exorcist" is available on the 2006 re-release of The Bleeding, "Zero the Hero" is available on the 15 Year Killing Spree compilation, and both are redundant to several other releases (including the Japanese Tomb of the Mutilated), I can't give any sort of recommendation here. If this was your intro to Cannibal Corpse, you were better off picking up Tomb of the Mutilated, and this EP does nothing but gather dust and decay anywhere it lies.