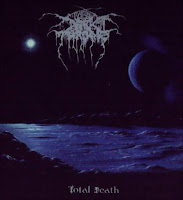 Total Death was the second album Darkthrone released through Moonfog Productions, and again we are faced with a minor re-invention of the band's sound, in particular the production. I have to admit this is one of the best mixed albums in the band's history, full of deep, resonant tones that add an extra layer of darkness to the band's already morbid aesthetic, a rich and fertile sea of evil which seems perfectly reflective of the album's cover image. The guitars are a thick and powerful morass of chords which rock hard whether they are channeling Bathory or Hellhammer. This album also marked a shift in how the band would write songs, with Fenriz performing drums and bass, and Nocturno Culto adding guitar and bass to his vocals. In addition, only half of the lyrics are written by Nocturno Culto (none here by Fenriz). For the remaining tracks, the band called upon the talents of their friends Ihsahn (Emperor), Satyr (Satyricon), Garm (Ulver) and Carl-Michael Eide (Ved Buens Ende). While the subtle differences are noticeable, all of them manage to do a little justice to this beloved band, though Fenriz is simply better in all cases.

Once the raging central rhythm to "Earth's Last Picture" arrives, you get an instant flashback to Blood, Fire, Death, because the song sounds like it would fit right in there, aside from Culto's more cryptic vocal style and the occasional lapses into squealing groove and huge, sludged out chords. If Quorthon and Tom G. Warrior had ever formed a band together, this might have been the result, and the nebulous darkness of this album's atmosphere only adds to the punch. It's a bloody awesome song, from the roaring verse riffs to the hooky chorus with its higher pitched chords. "Blackwinged" is like a high speed blackened shoegazer surf anthem, it's beautiful verse rhythm akin to the crashing of cold waves upon a rocky shore, and the shift to the bridge a wonderfully submersed grinding across a bare minimum of notes. When the track slows at around 2:30, it yet again visits the glorious pacing of Bathory. "Gathering for Attack on the Pearly Gates" features a familiar Transilvanian Hunger pace, but though the opening riff leaves something to be desired, credit should be given to Nocturno Culto, whose vocals really make the track until it swerves into the better pre-chorus, and eventually to a kickass, driving hyper-Hellhammer rhythm.

Souls of christ, prepare for fight
We'll crush your halls with bonecrushing
might supreme!

"Black Victory of Death" is amazing, another Darkthrone victory in which the duo proves that you only need two good riffs to really nail a track. When they hit the second, over the cruising drum beat, they yet again evoke their dark Swiss godz, but it is the dark and winding majesty of the opening guitar rhythm which really sells this. "Majestic Desolate Eye" is even better...one of the most glorious Darkthrone tracks ever and probably my favorite on this record. A driving, powerful rhythm churns into a languid, rock break, while the vocals cascade across like an extraterrestrial conqueror ordering his armies to attack Earth, and then the band erupts into a venomous blasting rhythm that delivers another beautiful payload riff, pretty chords simmering atop its climactic 4th count. That is does this all in just over 3 minutes is nothing shy of joy... "Blasphemer" twines about a good old school violent thrash rhythm, with an increased fuzz to the distortion, and an amazing bridge rhythm which creates a beautiful marriage with Culto's bloodsoaked vocal torture. "Ravnajuv" is pretty good, with a desperate woven melody that brings back the Transilvanian Hunger material, same pace and just a variation of two rhythms, though the track does break down near the climax. When summed up, this chunk of Total Death is honestly among the best material the band has written, but it doesn't last.

I say that because I find most of the closer, "The Serpent's Harvest" a bore, with a grooving ooze doom riff that tires me out after only a few repetitions, and the first change in riff does very little but speed it up. The creepy, almost Wild Western melodies of the bridge are quite nice, but they arrive a little too late to save the remainder of the track, and in the end, this is the major reason I don't rate the album higher.

In the end, Total Death is pretty damn good, though not one of their best overall efforts. The use of guest lyrics was a nice touch, but they're not Fenriz (or Culto), and there is at least the one song which doesn't really impress me ("The Serpent's Harvest", and a few segments of some others). That being said, if I were to create a compilation culled from all the band's albums, "Majestic Desolate Eye", "Blackwinged" and "Black Victory of Death" would likely fine a place there, and this is well worth the money for any ardent Darkthrone fan regardless of your favorite phase in the band's career.