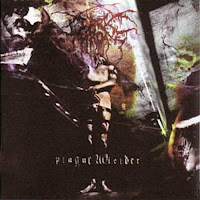 It's pretty much par for the course for 'elitist' black metal scrubs to harp on anything Darkthrone have accomplished beyond their first 4-5 albums, but of their entire body of work, Plaguewielder is the only album that might actually deserve a little flogging. No, not for the color cover art. Seriously, there were individuals who hacked this record to pieces because it had a color cover...even though the band had already used color covers...including their fucking debut album... So the band logo is also in color. Who cares? When did metal heads start getting their panties in a bunch over senseless details, and why don't they just leave the nerd rage to the nerds? This is the world we live in, folks, these are the people breeding among you.

But you've got about as much patience for my sociology lessons as I do in writing them. I had mentioned that this album may actually deserve a little ribbing, because truth be told, it is probably the worst Darkthrone album ever recorded. Gasp. Yes, this is perhaps the lowest point that the band has reached as of 2010, if you discount some of their rather useless EPs or singles. It's not that Plaguewielder is in any way terrible, or even bad. It's actually a very good record, with a few dull moments that hold it back from the greatness, and unlike so much of their work, I have not grown fonder of it through time, quite the opposite. I'd say, of the six tracks (only six, like the last album), there are four great ones, and two that have their high points and then a little lagging behind. As far as the production, it's not a lot different than Ravishing Grimness, only a bit more raw, as if the band were bridging back from its predecessor to their twilight years. Fenriz and Nocturno fill out their same roles as that album, with a few guest vocals on the track "Command", including Apollyon from Aura Noir, Immortal, etc.

Part of the problem with Plaguewielder is that it doesn't put its best foot forward. "Weakling Avenger" might open with an entertaining sample of the band members groaning and creaking as they clear their throats, a strange intro before a fairly majestic carousel-sounding black metal rhythm enters the fray, soon shifting into faster territory with a pretty average Norse rhythm one would expect from many of the band's peers. This goes on for nearly 8 minutes, and until about half way through at 4:00 where the band does a breakdown, I can feel a tinge of ennui coming on when I listen to this. It's not terrible, and the sound is nice and savage, it's simply not one of the better sequences of notes strung together here. "Raining Murder" feels as if it might suffer the same fate until the turbulent bridge rhythm, over which a rumbling storm erupts, and the song begins to emit an air of psychotic mayhem true to the implications of its title, and the breakdown here is a lot better than in the first track. "Sin Origin" feels a lot more like the old Darkthrone of A Blaze in the Northern Sky, albeit in the brighter, bloodied hacking tones of Ravishing Grimness. The melody at the minute mark is excellent, with a firm, circular rocking rhythm that descends into a more disjointed take on their Hellhammer-ing doom.

"Command" is another of the album's longer tracks, at 8 minutes, but it carries this well, with some churning grooves that collapse into a rainbow of desolate chords, Culto's vocals springing out like a shadowcat stalking wounded prey. The rapid transition feels immediate and reminiscent of something the band would have written for Transilvanian Hunger, and the backing vocal eruption is pretty fucking sweet. "I, Voidhanger" reminded me a little of Voivod, if only for the stream of spacey, grooving chords and rolling footwork, which eventually builds into a solid, memorable thrashing rhythm before the blasted outbreak of its climax. "Wreak" is over nine minutes of utter havoc, but like the opening track "Weakling Avenger", it doesn't fully carry its weight. Some of the riffs are simply repeated a few times too often, and while there are numerous dynamic shifts, all of which produce positive short-term results, I feel as if it could have been two separate tracks or at least trimmed down to a more digestable form. That being said, the riffs themselves are decent, and I've definitely heard a lot more numbing waste of space in a black metal song

As you can tell, this album is not quite the disaster it is often painted as. For a career low, it's still pretty entertaining, and in fact, I can think of numerous black metal bands who have yet to even release something of its quality. The lyrics are still interesting, Fenriz and Nocturno are in fine form, but there is just something missing...some almost intangible, voracious spirit that temporarily removed itself from the studio or songwriting to smoke a cigarette this time out. Anyone can have an off day, or an off record, and it's a testament to the mighty Darkthrone that even their off days are pretty fabulous.