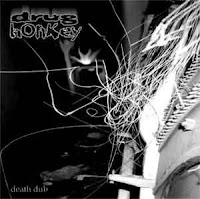 There are really two ways to look at an album like Dub Death, the fourth from Chicago's wayward demons Drug Honkey. You could easily dismiss this as a godawful, random experiment in sporadic, convulsive rocking noise that grows dimmer and darker as it struggles through 42 minutes attempting to actually kill you. Or, you could take the proper dosage of lethal, abusive substances and crash yourself on the nearest level concrete plain, staring at the nothing of your past, present and future as Drug Honkey provides the soundtrack to the slippage of all your vital energies, out through your skin and into the haunted atmosphere. I probably fall somewhere in between these two poles in my opinion of the material: while I certainly find this a lot more calculated and clever than it seems on an initial playthrough, only half of these tracks gripped me as much as I'd have liked, and that's coming from a person who plans on one day commiting suicide to Merzbow before the Commies and unicorns can get him.

To start, how does one describe the sound of Death Dub? Is it doom? Perhaps not in the traditional sense, but you will certainly very fucking doomed after listening to it. Is it psychedelia? Improvisational noise? A set of showtunes for the gathering of all negative human emotions in existence? Yes, yes, and yes. What artists would you compare its sound with? Many, and none. The thick, pummeling bass lines and general, crashing industrial sheen reminds one a lot of Godflesh, or the noisy angst rock of Zeni Geva. The spaced out influence found in a few of the sparse, discordant rhythms could channel anything from Voivod to Yob. The depressive, doomlike atmosphere borders on Esoteric levels, though the songs are not that painfully long. But even this wide array of potential influence cannot even begin to contain the insanity that is Drug Honkey, so color them original.

"My Sins" sounds like a satellite feed from a planet of man-sized alien cockroaches, speaking over CB radios in a carnal, forgotten language about what to do with the human herd they plan to cultivate. Of course, the actual lyrics are far from this, but I'm just trying to give a hint as to how fucking out there this band can get. Vocalist Honkey Head (also known as Paul Gillis of Morgue Supplier, Asscavern and other crazy bands) is himself performing an entire psychic tapestry alongside the freebase, bass-line thunder and haunting, sinister atmospherics of the guitars. He will range from disgusting, turbulent barks to higher pitched junkie wails and often somewhere between the two at a tone similar to (but less repetetive) than early Broadrick. Really, the vocals are being used as much as a blunt instrument to brain the listener as they are to deliver their stark, desolate poetry, and trust me, though the band's lyrics and song titles might feel too pedestrian for the horrifying racket they produce, there is a level of awareness and poetry within.

Since we, bruised up
Everything is pleasure
Since you, bruised her
I am the loser

Just think about these simple lines for a spell? Pretty interesting. "The Devil Lasts Forever" is a little more bottom heavy and convulsive, like your old lady howling at you through a drug infused haze after you've done something, very, very wrong. Like YOU ARE GOING TO FUCKING PRISON TO BE RAPED UP THE ARSE wrong. "Death Threats" is a sparser experiment, stretching for over 8 minutes against a tortured void of oppression. The vocals here are imperative and warming company; like if you were on a moon base alone for decades and suddenly you would accept just about any noise from a human being or robot as your guiding light and companion, so too do you accept this screaming and snarling as your only friend in a very fucked up, endless night.

But it is only after this point at which the album really starts to take off, with the completely fucked and awesome slow churning butter ringing of "Communion". A guitar chugs ever slowly, and from the disgusting mutes flow spacey, jangling noises like satellite signals communicating off giant space dishes, while Head Honkey howls lyrical abuse at the holy trinity which would even Nietzsche cringe. "I Can Not" is another of my favorites, very slow to start, but the warped bass lines and ringing clean guitars merge with the super guttural static vocals, you can't but feel that your transition to another world is complete, an awareness of all the fucked upness of your environment now branding you alien to the folly of human emotions. "China Black (Heroin Pt. 2)" is a live cut recorded at the Double Door in Chicago, with an amusing spoken introduction that leads into a trancelike freeform rambling. Although interesting, I didn't get into it as much as some of the studio material.

I'm your god
I fucked your life

The final two tracks of the Death Dub are a cool nightmare-scapish cover of Pigface's "Burundi", from their 1997 double album A New High in Low, which would probably drive Martin Atkins to stab his eyes out with his drumsticks; and "Who the Fuck?", which is just over a minute of scathing, incendiary noise that feels like the entire atmosphere of the first 5 tracks sped up in a blender, a microcosm of absolute fucking terror with a semi-catchy vocal repetition. While curious, neither of these tracks really do justice to the originals that comprise the first 34-35 minutes of the album, and they are best approached as a separate entity.

Drug Honkey is very much fucked up, and their style is only going to appeal to a handful of people, the kind of people we'd all be very lucky to know, since they are capable of mining the basest level of art from even the most vitriol-injected sources. I happen to be one such person, but I'll be honest, for the first month I listened to this album I could not come up with the words to accurately describe it, and I thought of it as a convincing and cruel effort that I would very much wish upon my enemies. Funny thing about actually paying attention, is you start to see through your own limitations to a broader world beyond, and it is in this world that Drug Honkey inhabits. Death Dub is really interesting, and really good, at least for the first 5 tracks. The remainder of the material is compelling, but only the live tune jibes well enough with the material leading up to it. Don't be misled by the rather free-form, loose feel of the compositions; if it is something outlandish you seek in your extreme music, you might want to fire your dealer and suscribe to Drug Honkey instead.

You can't escape the unicorns, and if you somehow DO, the narwhals will be waiting. Just fucking give up.

I'm liking this so far - it has a nice sludge groove hidden in it to pull you along the fucked-up noise, like a conveyor belt of barbed wire. This is far more aggressive, but I could see it going great with some Black Mayonnaise.

Would you recommend any of the related bands, like the singer's other stuff that you mentioned?

Morgue Supplier is good, I reviewed their new EP not too long ago.

Head Honkey informed me that this Drug Honkey album was actually improv...