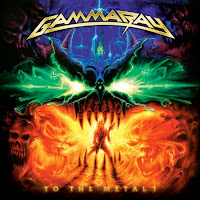 So I guess this year Gamma Ray's plan was to shock us all with one of the worst album titles we'd see, until you realize that it's just an incomplete cliche: 'pedal to the metal', and then it doesn't hurt quite so much. As for the album itself, it's an exercise in frustration, for it's a mix of some of the most mediocre tracks I've heard from the band in years, and a few that are honestly quite excellent. Sift through this bloated cesspool of stagnation and you are assured to uncover a few priceless gems, but no paycheck could be large enough to cover the damages of its many mundane pitfalls. Coincidentally, no paycheck should be large enough that Kai would write some of these songs. Has he finally lost his mind? Is the man just too awesome for a single corporeal body to contain all of that awesome, so now it is running loose into little marginal half-Kai impersonators? My guess is that he doesn't actually write all the songs, and reading more into the album confirms the suspicion.

"Empathy" is an atmospheric heavy rocker, and while it's not outstanding, it at least grants you hope that this might be a great album. Again, the problem is that, while there is nothing technically wrong with the music, it simply never achieves the same crescendo or unforgettable hook that so many of their past songs have delivered. "All You Need to Know" is a real treat, perhaps the sole track on this album to capture the power and brilliance of the band's New World Disorder album, and features a guest vocal spot from none other than former Helloween frontman Michael Kiske. If that doesn't make you smile, put the album down and go listen to Opeth or Wolves in the Throne Room or whatever you kids are listening to these years, because you probably don't need to be listening to Gamma Ray in the first place. It helps that the song is also quite great...

"Time to Live" is poppy and punchy, with a nice escalation through the verse to its sombering, melodic rage, but while tight, it's yet another of the songs that doesn't deliver on its promise."To the Metal" is probably Gamma Ray's attempt to rekindle the fires of 80s rock anthems by Twisted Sister or Quiet Riot, but unless you fancy yourself some guy who wants to run around a concert banging his fists and screaming HAIL TO THE METAL!, it once again falls flat. The bridge where the band builds up the psychotic distorted song title against a chorus-like backdrop is underwhelming. "Rise" gives Maiden a go for a few seconds before transforming into one of the band's prevalent, driving anthems, with drifting walls of background vocals and plenty of the band's signature tiny melodies surging through the thicker rhythmic core. It's solid Gamma Ray, though it doesn't ever really hit a memorable stride.

"Mother Angel" has a great, classic rhythm riff and tone, content at its steady mid pace, and though it's hardly remarkable, it is the first track here I can say I enjoyed. "Shine Forever" has some balls to it, with Kai reaching a Halford level in the verse, before the big Queen-like chorus, and there are also some down and dirty vocals here which border on melodic death metal. The lyrics are entirely cheesy and throwaway, but it's easily one of the only tracks here I can say I enjoyed. "Deadlands" opens with a plunky little keyboard rhythm, and a guitar melody that reminds me almost exactly of the chords that open "Sole Survivor" from Helloween's Master of the Rings, but otherwise not bad if you're a fan of the band's Powerplant and Somewhere Out in Space albums. That said, I was waiting for the killer hook to sell me, and again, it never manifested.

"Chasing Shadows" features a wonderful thrust of melody with a nice synthesizer intro, and some guitar/synth dual shredding deep in the bridge. I really wish more of To The Metal consisted of songs like this one, then we'd be having a far different conversation. The finale of the album, "No Need to Cry" is another example of how great German bands like this one still keep one foot firmly planted in the hard rock that inspired them back in the 70s, a lame power ballad at large, though the acoustic break in the middle channels a mix of Queen, Zeppelin, Rush and Zebra. The power chord climax is like a dick going limp, and the lyrics are rather sedate, but considering that the song was written by Dirk Schlächter after the passing of his father, we'll give those a pass.

Anyway I try to spin it, this album is still pretty underwhelming for the majority of its 48 minute playtime. There are a few good songs, and one I would consider excellent, but the rest feel rather redundant and uninspired, with the ballad carrying almost no weight (despite the gravity of its subject matter). Gamma Ray have seen far better days, and this is the probably their worst overall effort, even less interesting than the original Land of the Free (I realize I'm alone on that, but I still feel the album was a drag among its perky siblings). They can still play like demons, and the Michael Kiske guest spot was a joyous occasion, but I'm still seeking a German power metal release to come along and kick my ass like so many of them used to.

Highlights: All You Need to Know, Shine Forever, Chasing Shadows