The Sarcophagus - Towards the Eternal Chaos (2009) 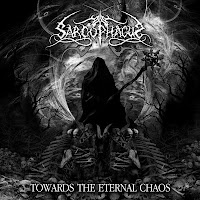 The Sarcophagus is a Turkish black metal band with several members of the band Raven Woods, and in this form have existed for over a decade now, only getting around to their debut full-length last year. They've made a wise decision to recruit the infamous Kvarforth as a session singer for their recordings, and I have to admit, while I am oft critical of the man's attitude, his performance here is nothing short of phenomenal, on par with any of his better releases through his mainstay Shining. The guy just lets loose here, with a maddening, manly rough edge to his tone that would probably shave the stubble off your chin if you could package it to accessorize your favorite razor.

The band plays in an ever charging style of melodic black which is made bolder than it should by both the vocals and the raw, echoing atmosphere it is recorded in. It's both carnal and strangely soothing, and though the riffs individually do not often impress, their marriage with the shadowy, mountainous tones provides an unmistakable journey, which is the ideal for any black metal effort. The Sarcophagus will transport you somewhere, whether it's the desolate summit of an earthen spire or the deepest, dankest dungeon in which you await your execution. In just under 50 minutes and 10 tracks of such execution, the band has gone from off the radar completely to perhaps Turkey's very best black metal artist, and their signing with Osmose Productions ensures that the message get out beyond the normal barriers.

The title track is a haunting intro piece which swells with a dark, medieval ambience curried through violins, xylophone and a martial escalation of sweeping orchestration that blows up directly into "Legend Sleeps Behind the Mountains", and you are cast straight into the band's vision of desperation and ancient, yet not forgotten passion for history. The riffs cascade like a flow of falling rock as it crashes into a river beneath, and each lyrical jab is like a mad heretic screaming forth from a cliffside as he sends his pet ravens to pluck out your eyes. The onslaught persists through most of the album's tracks, notables including "Hymn to Awakening", or "Age of Demons" with its Hellhammer-ing, Bathory breakdown. The vocals are fucking insane on that last track, alone making it worthwhile. The slower chagrin of the band's namesake "The Sarcophagus" is also quite excellent, as is the surging melancholy of "Anatolian Dragons". Yet no track on this album will allow your escape from its atmospheric wonders, and Kvarforth lives up to, no, surpasses his hype here.

Towards the Eternal Chaos is another great black metal album for a year already loaded to the teeth with unforgettable works, and though it does not yet reek of perfection, it's certainly a force for excitement in the Turkish scene, for I haven't gotten this riled up over a Turk metal band since Mezarkabul. Well worth tracking down, whether you appreciate this singer's other bands or just a good swift ass kicking loyal to the forefathers of the genre.