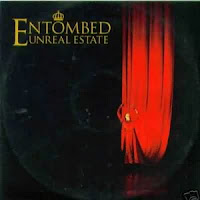 Unreal Estate is the 2nd live album from Sweden's Entombed, and a far more interesting product than its predecessor Monkey Puss (Live in London). If not only for the superior sound and interesting track list, which features mostly newer material, it was recording during the band's 2002 performances at the Royal Opera Hall in Stockholm, where the band was accompanied by 30 dancers of the Swedish Royal Ballet, translating the band's death metal rock & roll to a visual medium. Yes, a death metal ballet. And this must be the only flaw with Unreal Estate...because this simply should not have been released with only the audio component. The booklet does feature some great pictures of the events, but it's simply not the same as seeing them in motion to the music.

But, alas, this is an audio product, and as such, it's certainly impressive. The guitars are chunky but clean, and being that this was not your average rock hall concert, you don't get any loud jeering or hissing applause between tracks, lending the material a certain, stilled degree of darkness which increases the effect. The band is also spot on here, with pretty accurate, and largely unfiltered performances, none of the messy bootleg feeling of Monkey Puss. L-G Petrov sounds ominous on this recording, like a prophet of the end times, relating his bitter rock & roll violence to a surely fascinated crowd of both Entombed dopeheads playing dress-up and ballet fans who must have been blown away. The thought of some shut-in ballet/opera snob purchasing a death metal album after one of these performances is more than enough to lube my chassis.

The performance opens with "DCLXVI" from To Ride, Shoot Straight and Speak the Truth, an adequate piano piece which might have seemed a relief to any showgoers who weren't expecting the aggression to follow. "Chief Rebel Angel" is one of two tracks here to represent the Morning Star album, which was the most recent full-length out in shops at this time. It sounds really good, backing vocals included, and a perfect chugging gait to the guitars which must have been hugely resonant in such a performance venue. The other Morning Star track here is "Mental Twin", with its ominous, sailing octave chords and pummeling bass undertow. A larger chunk of the live is devoted towards material from Uprising. The plodding bass of "Say It In Slugs" is great to ease the audience into the bands harder material. The impossibly thick chugging that opens "Returning to Madness" is a vibrant molasses, and this is another bass heavy offering which must have been a sight with all the ballet dancers. "In the Flesh" is likewise great, eerie organs transforming into the track's dark, murderous blues, and "Something Out of Nothing" fits like a missing jigsaw piece with its Slayer-ific intro rhythm and balls deep rocking edge.

"Unreal Estate" is a fast paced, deathgrind track under a minute long which was included in the performance, and another unique piece is "It is Later Than You Think", an unnerving ambient sequence with voice loops, bells and noise samples. The band also performs their cover of Rory Ericksson's "Night of the Vampire" here, which meshes in very well with the originals they've chosen to include, and I honestly prefer this live version to their studio takes. Closing out Unreal Estate is the sole track from their old days, the extended instrumental bridge of "Left Hand Path", which sounds amazing in this dark, theatric atmosphere, possessing more gravity than most of the rest combined.

It's a little regretful that they did not incorporate more early material to this release, since that one track sounds so brilliant here, and though the remaining songs are good, they simply don't compare in compositional skill. This is only one of the performances, there were several, so it is possible there could be other set lists recorded, but unlikely, as that would have required the ballet dancers to rehearse a lot more material. At least there is a good cross offering of material, and they don't include any of the rock tracks from their two worst albums (Same Difference and To Ride, Shoot Straight and Speak the Truth). Unreal Estate is a great experience, and I'd be a fool not to be jealous of those who got to participate in it. This is another successful experiment for a band unafraid to cross lines, but it would have been far better had it included the full video, shot in a quality rivaling the audio. I can't imagine having one without the other, but sadly, you'll have to stare at the pictures and use your own imagination.