Entombed - To Ride, Shoot Straight and Speak the Truth (1997) 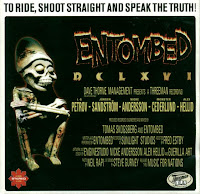 Sometimes a great idea can go south pretty quickly, but in the case of To Ride, Shoot Straight and Speak the Truth, we had to wait about four years for it to go south. Whereas the previous album Wolverine Blues injected more of the band's punk, blues and rock & roll influence successfully into their death metal foundation, this 4th album pretty much leeches all the life and potential out of the hybrid of styles, with about 10-11 entirely boring songs that I can remember skipping over as early as the second listen through the album. Wolverine Blues may have stretched the patience of some fans, who were very disappointed to hear Entombed take a step away from their classic albums Left Hand Path and Clandestine, but at least that was a song built on a promising principle and some fine songwriting, with memorable hooks galore and feeling extremely original for what it was.

To Ride, Shoot Straight and Speak the Truth lacks all that skilled writing, all of that inspiration, and to be honest, much of the raw energy of its predecessor. So much of this should have just been left on the cutting room floor until it could have been developed into a decent set of songs. I'm not much of a fisherman these days, but I can recall expeditions in my youth in which I'd reel in fish that were simply too small to be considered for dinner. So I'd throw them back in the pond, hoping in a few months or years I'd return for them in their full volume and fighting spirit. Entombed might have done the same with To Ride, Shoot Straight and Speak the Truth, rather than underwhelm us so after four eager years. This album may not be the equivalent to Metallica's St. Anger level of crushing disappointment, but it certainly qualifies as a Load, or Re-Load. Unfortunately, even at its most aroused state, this album is firing a load of blanks.

The title track feels like an attempt to build some sort of tension for a far more energetic track to follow, but it's really just a hustling, shuffling blues rock rhythm with a few dull boogie downs, even when L-G Petrov howls his angst over the melodic guitars in the bridge, it's still about as exciting getting to your mailbox and finding nothing but spam. "Like This with the Devil" might have saved the album's suffering, but the grooving riff that opens it feels like the same thing any lowbrow nu-metal Ozzfest opener might have performed, and the slightly punk shift to the bridge does nothing for it. "Lights Out" sounds like a track from Wolverine Blues being castrated, with a meaty guitar tone but a lazy chord sequence that does very little, nor does the chorus. "Wound" is a little noisier, like a Melvins take on Entombed, but once more, the very dull writing kills it quickly, and "They" is very high on the rock and roll and low on the memorable scale. "Somewhat Peculiar" might have been the first song on the album I never felt I really had to skip, with huge grungy bends and a half decent bridge melody on the guitar, but I probably wouldn't include it on an Entombed mix tape even if I had to choose songs from every album.

The piano piece "DCLXVI" serves as an intermission, and surprisingly it is one of the better composed pieces of music on the album, which would have been served wisely as the intro with a truly ass kicking song to follow. Here it's in the middle, and followed by "Parasight", which is another of the album's better tracks, especially when it builds up the crazy ass chorus around :45, but still choked with a throwaway riff or two. "Damn Deal Done" is like your feel good, hillbilly stoner rock meets grunge, with a riff inspired by the usual suspects (Zeppelin, Sabbath, Hendrix, etc), which sadly remains interesting for about as long as it takes for you to reach the SKIP button on your CD player. "Put Me Out" has a pretty cool Uncle Fester rockabilly, creepy vocal intro, infused with freakish laughter that sounds like the band might be about to bust out "The Monster Mash", but once the novelty ends, so does the interest level.

"Just as Sad" would almost be good, only the band have done far better songs of this nature on the previous Wolverine Blues (like "Eyemaster") or the Hollowman EP ("Serpent Speech"). "Boats" has a kinda cool blues swagger to it, like a Danzig/Melvins hybrid, but after the wah spin to the original hook, nothing exciting manifests. "Uffe's Horroshow" is a turbulent jammer with a few vocals, but simply serves as a minute or so of undeveloped potenial, bruising rhythms and howling. Interestingly, the song "Wreckage" is the final cut on the album, after seeing an EP release earlier alongside some cover tracks. I'd have to say it's the best song on this whole album, with a pissed off, filthy punch to the guitars and a nice little guitar fill in the chorus. But considering what it has here to compete with...that's just not saying much.

I guess if you'd had your fingers crossed that Entombed would move into an even more punkish blues rock direction post-Wolverine Blues, you might have found yourself briefly amused by this album, but it arrived and departed, nobody really cared, and people at their live gigs were still craving to old school butchery of their first two full-lengths. But clearly, judging by the album to follow, Entombed had yet to fully wash the mediocrity out of their systems. My opinions on this album may closely resemble the flat-lining signal on a heart monitor, but at least it's not Same Difference.

Verdict: Indifference [5/10] (sinking by the minute)