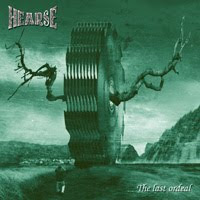 Though in general I feel that the career of Sweden's Hearse has been on the constant upswing, their third album The Last Ordeal was a little bit of a jam in the gear. The album is not a heavy departure in style from the previous year's Armageddon, Mon Amour, and there is a great, almost live quality to the album through which you can almost feel a subliminal audience cheering for the band's rocking rhythms and blazing blues-based melody. Cranked to its full potential, there is no doubt that headbanging can ensue from its vital energies, but the actual songs do not provide much in the way of memorable entertainment, and it's another of those many albums delegated to just 'good' and going no further down the brain stalk towards the heart.

"Pathfinder" sounds good and crushing with a rock momentum that occasionally skirts the band's death metal core, but the melodies are not all that interesting, simply blues wail-offs that bridge the sodden rhythmic structure. The best part of the song comes near the 3:00 mark when Liiva does some freakish, otherworldly, demonic vocals, and then the bridge dies into a tranquil segment around 4:00 with some ethereal female singing. "Quintessence" feels more like an Entombed variety of death and roll, breaking for a thudding bass line drowned in droning guitars, before a more forward, violent thrust. While dynamic, and certainly one of the heaviest songs on the album, there isn't a lot here that I enjoyed save maybe the bridge melodies, and how Liiva doubles up his growls with a clean tone. "Shackles of Guilt" has an interesting intro, with children crooning in the foreground of what sounds like helicopter blades spinning...freaky. As the rock arrives, it features more of a series of Entombed-like balls-out punk riffs.

"Ambrosia" follows, a 2 minute instrumental laden in thick, doom-like atmosphere, where a ringing harmonic guitar follows a pattern of chords into the rolling wall of thrash that inaugurates "Una Lucha a Muerte", all brazen leads and immersive momentum that serves as the most interesting song on the album to this point. "Bountyhunter" is one better, a viral, thick death/thrasher with a lot of biting melodies that simmer foremost in the broth. Some of the atmosphere Johan creates when his vocals tear off echoing through the bludgeoning valleys of the guitars are stunning, and I really like the vibrato effect he interjects on some of the cleans. A dark trip worth taking, though the lyrics are mediocre at best.

The third and final section of the album begins with another instrumental, this time the folksy "Demon Curd" which erupts from river-rolling acoustics to blunt weapon-chords, built almost exclusively for the mosh pit or for some private activity in which you...mosh alone? Second to last "Aggravation" paints a broad blues brush with its opening salvo of rhythms, before a cool seque with a whispered sample, and then some barreling caustic death'n'punk hardcore over which Liiva offers some somber, monk-like chanting. Its a strange mix, between the more uplifting guitars and these bleak monastery overtures, but somehow works as one of the album's better tracks. "The Last Ordeal" is likewise unique, a slowly building, dark gothic rock which collapses under the weight of some crushing chords and Johan's swerving from aggressive to just somber.

This is nowhere near the best of Hearse, but pay special attention to the production of the album and the vocals, which are certainly as strong as their other albums. Though I have compared the band to Entombed often, they're really a lot more dynamic and atmospheric, as if everything were recorded to provide a cavernous (or space void) quality, which is perhaps where the subliminal audience comes into focus. If you're new to the band, I'd advise hunting down Single Ticket to Paradise or Armageddon, Mon Amour, but if your curiosity runs a little deeper, than you wouldn't be entirely disappointed with The Last Ordeal.