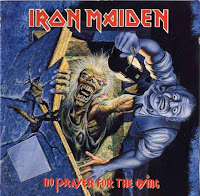 Iron Maiden hit a brick wall when they released their 8th full-length No Prayer for the Dying, because the world was moving on and it was pretty obvious that the boys had no intention of keeping up with it. And should they have even tried? Part of me wants to say, fuck no. Granted, this was the same year Judas Priest released Painkiller, which I would argue did in fact 'keep up with it'. Yet, rather than a heavier, more forceful Maiden, they kept the status quo. I had already mentioned that I felt Iron's 'dating' had begun with Seventh Son of a Seventh Son, and this album furthers that theory, but regardless of what I or anyone else might say about its lack of wall to wall arena-stunning anthems, the fact is that No Prayer for the Dying is not really a 'bad' entry into their catalog. It comes and goes, with a few pretty good songs (some of which even entered their live program), and doesn't necessarily leave a foul aftertaste in the mouth. Only a craving for more, and better...

But the advent of Viagra aside, just how many bands could 'keep it up' as long as Maiden did in the 80s? I think it's asking a little much, but since Seventh Son of a Seventh Son was so loved, expectations were huge for this, and honestly it just wasn't bound for success in a metal scene that was producing efforts like Painkiller or Rust in Peace in the very same year. Though I have my doubts that it might have turned out much differently, this is the first album on which Janick Gers (White Spirit) had joined the band, being asked to replace the departing Adrian Smith, after he had worked with Dickinson on his first solo album. I honestly didn't notice a different, though clearly Gers and Dave Murray in tandem had a more driving rhythm than past (and future) Maiden albums.

"Tailgunner" is a strong opener to the album, in part because it's one of those soaring rhythmic tracks that feels like a natural spiritul sequel to something like "Aces High", "2 Minutes to Midnight" or "Where Eagles Dare". The bridge is quite good, with crashing grooves beneath the racing dual melodies, and it's honestly one of Maiden's heavier tracks of the 90s. I'm not entirely fond of "Holy Smoke", though its got a more barroom brawl mentality than many of the band's other songs, and there are still a few worthwhile melodies in there, plus a filthy delivery courtesy of Dickinson. The title track only skirts on being memorable, due to the light synth melody that slowly builds to the climax. It's the type that you'll remember as you're listening, but simply not wish to listen to independently of its environs. I really enjoy the little guitar melody right around the minute mark of "Public Enema Number One", and the entire song delivers more than several others you'll find here, with a little choppy guitar harmony section that introduces the fairly scathing lead guitar.

A million network slaves, in an Advertising new age
I don't need a crystal ball to sell ya
Your children have more brains, than your drug infested remains
California dreaming as the Earth dies screaming

"Fates Warning" is not a song I think much about, partly because the guitar rhythm reminds me much of "Chains of Misery" from the following album Fear of the Dark, and I liked that one a little more. However, the vocal performance is pretty passionate, and it's not unpleasant to sit through by any means. Though "The Assassin" is plucky and keeps a busy rhythm due to the little guitars that grind off to counter the central rhythm, the chorus is somewhat underwhelming and it's not a favorite here. Ditto for "Run Silent Run Deep", though it has a nice savage pace and a song about submarines was probably inevitable for Iron Maiden.

As mixed as my feelings may be for much of the album thus far, I actually really enjoyed the final three tracks on No Prayer for the Dying, all of which stand out the most to me after two decades. "Hooks in You" is pure kickass rock & roll, with a nice jangling rhythm around the verse, and a really killer chorus that you simply can't ignore...for both Dick's fun delivery and the actual lyrics themselves:

Hooks in you, hooks in me, hooks in the ceiling for that well hung feeling
No big deal, no big sin, strung up on love I got the hooks screwed in

I appreciate the duality here, between the smutty S&M and the wider implications of any relationship. I also love the ringing, old school guitar on the bridge over Dickinson's moodier vocals, took me right back to Somewhere in Time. "Bring Your Daughter...to the Slaughter" needs little introduction, as it wound up the most successful song on the album, worming its way into the hearts of fans and a staple in Maiden's live rotation for many years. And for good reason...the vocals are extremely infectious, as is the moody, Billy Idol-like gothic rock atmosphere of the verse, and the big R&B-gone metal chorus. It's like the next best thing to "White Wedding". And though it's the most 'far out' track on the album, "Mother Russia" does much to evoke the natural, hammer and sickle rhythms of that territory, and it's great that Dickinson and crew aren't trying to totally take the piss out of the formerly 'feared' capital nation of Soviet Union, but celebrating the chance it now had to return to its roots.

As you can see, No Prayer for the Dying does deliver...it's just that the milkman has brought you skim since they were all out of whole milk. Tasty, refreshing and light, but it's not going to fill your belly or satisfy that craving alongside those chocolate chip cookies. There's no reason to dwell on it or direct much dissatisfaction when there are such staggering disappointments on the late 90s horizon.

Highlights: Tailgunner, Hooks in You, Bring Your Daughter...to the Slaughter, Mother Russia