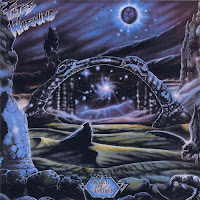 Awaken the Guardian is the 3rd full length of Fates Warning and the bittersweet swansong for John Arch as the band's frontman. The first thing you'll probably notice is the stunning cover art from Ioannis, who had also contributed imagery for The Spectre Within, Liege Lord's Burn To My Touch, and various other metal and rock albums (several for pretty big named artists). Not only is this painting vivid and beautiful in its choice of color tones and soft, rounded imagery, but it also somehow captures the fantastic spirit that this band once thrived on. It's also pretty sad, because it represents the last of Fates Warning's albums to explore this theme. No Exit may not have been a massive stylistic detour from this record, but the lyrics were already shifting towards a more social and political spectrum.

Make no mistake in thinking Arch and this band parted ways due to any subpar performance, because his work here is both crystalline an elegant. It's very much a refinement of his work on The Spectre Within, though the entire album is arguably more stable and consistent (note that I do not say 'better'). In fact, Awaken the Guardian feels like it might have worked out as a unified concept album, since so many of its tracks ring true to the central atmosphere of siren-like vocal melodies and thick, driving guitar rhythms which reek of sorrowful melodies and forgotten worlds, times long past. This probably also stems from the arrival of Frank "X" Aresti to the band, replacing Victor Arduini's six-strings in the lineup.

"The Sorceress" lifts the first veil from this saddened, twilight epoch with ringing acoustics that mesmerize quite like they were used on The Spectre Within, before the mystic rhythms begin to weave spiderwebs of longing and regret in an even more complex, progressive fashion than the riffs on the predecessor. The track also features some a sluggish doom breakdown and some fine leadwork which scatters to the wind before the final verse. "Valley of the Dolls" begins with one of the very best melodic power metal rhythms I've ever had the pleasure of hearing, before picking up into a complex sequence of searing speed metal below the fairytale vocals. Very much a classic, and one of the most distinct tracks of the band's career, it threads a spike of melodic aggression through walls of shrieking, majestic Arch-ways and evil subterranean bridge riffs. "Fata Morgana" spares no time for thought, immediately thrusting you back into the graceful melodies and powerful post-Maiden guitar work. Arch is a beast in this song, cascading down its shimmering slopes like a river of liquefied sapphire, with one of his more memorable screaming chorus lines:

Fata Morgana. . .
She will take you, your hungry scarred harlot hunting another heart
Morrigan fallen angel, kneeling at the widows altar, temptress of my dreams. . .
She's the widow of my dreams

If your heart doesn't break here, longing for the fallen beauty of female fantasy archetypes that you once dreamed of as a young lad before masturbation ever entered the picture, then Awaken the Guardian probably isn't for you. "Guardian" presses on with a brief acoustic passage that wends into powerful, stunting chords and a lush melody, before returning to its morose cleanliness of melancholic acoustic harmonies, Arch spawning his crystal-tinted, cautionary hymns through a series of counter-melodies and a fabulous bridge which had fans of Geoff Tate or Bruce Dickinson salivating all over their knuckles. "Prelude to Ruin" is another flawless execution, with opening dual leads that scorch as they pan alongside the somber rhythms, hands down some of my favorite riffing on the album, and another of Arch's flights of fantasy. After hearing his performance on this track, how could any band part with him? I would have shoveled money at this dude for at least 3 more albums, even if his heart wasn't in it. Killer riffs, killer leads that build a golden dream-bridge to some external realm we have all lost in our adolescence.

"Giant's Lore (Heart of Winter)" is not my favorite cut on the album, but there is an undeniable charm to the second riff around :20, and this is used numerous times, altered to paint broad strokes against the titan-sized implications of its mythology. Along with the following, pretty yet forgettable, 2 minute instrumental piece "Time Long Past", it represents the weakest block on the album, but that's saying a lot, because even these tracks have an extraordinary plotting which never removes you from the mythic vistas of the album's scope. "Exodus", the 8+ minute finale, is an epic and welcome piece which explores a number of moods, from the crowning vocal glories of its verses to the sobering acoustic breech and back again.

Awaken the Guardian is, not surprisingly, another of those classic 80s recordings which hold up even today with their balance of glimmering highs and murky lows. Despite John Arch's powerful, cutting delivery, the guitars remain good and thick, and you will not miss a note even when he's wailing at full force. The writing borrows quite a lot from best available source, Iron Maiden, with a superb sense for melody and rifling, busybody bass-work, but the Connecticut band has a much more morose darkness about them which is timeless and still refreshing. This album and its two predecessors represent a little niche in power/speed metal which we've simply not returned to in the 20+ years since, and though I may always favor the brilliant Spectre Within, the silver medal of Fates Warning's career MUST belong around this record's banshee-white neck.