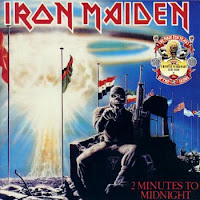 2 Minutes to Midnight/Aces High is the 6th EP release in the First Ten Years collection, and like the Part IX single featuring Can I Play in Madness? and The Evil That Men Do, it benefits greatly from the inclusion of non-album material. Granted, it's not all studio work, but at least it beats B-sides that are straight from albums.

The original 2 Minutes to Midnight single was releasd in 1984, and in addition to the kickass title track, it includes a studio cover of "Rainbow's Gold" from the bands' friends Beckett. This is a very groovy hard rock tune with a little NWOBHM in there, try and imagine a happy medium between Deep Purple and Thin Lizzy, and Dickinson really brings it up to the Maiden level. The other bonus track is "Mission from 'Arry", which is not actually music, but a taped argument between Nicko McBrain, Steve Harris and some techs. In a way, I actually prefer something like this to Nicko's narrative tracks, because though it's not extremely valuable, it offers a realistic little snippet of the band at their worst, rather than the forced humor of the bonus monologues included with the EPs.

Also, from 1984, the Aces High single features another of the very best tracks from Powerslave. For its B-sides, there is a live version of "Number of the Beast", and a pair of Nektar covers slapped together under the title of one, "King of Twilight" (includes a part of "Crying in the Dark"). If you're not familiar with Nektar, well it might be time to check them out, as they were a pretty cool prog rock band featuring a mixed German and English lineup. The Maiden version is tight and powerful, and I really can't stress enough how classy the guys have been throughout their career, picking forgotten gems like this one instead of more obvious covers.

"Listen with Nicko!" part six is another 10 minute narrative piece where he goes over the singles, but it's not extremely interesting except where he goes on about the "Mission from 'Arry" argument, shedding a little light onto the situation. This EP is really not all that special save for the Beckett and Nektar covers, as the live "Number of the Beast" feels somewhat redundant and forced in place of another, more interesting cover or potential B-side, but there are certainly worse in the series.