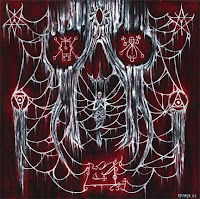 I can't claim to be enamored of every artist to arrive down the Profound Lore pipe, but I also can't deny that they're doing something right, with an ear for some authentic and refreshing takes on old sounds. This is where Vasaeleth comes in, a collaboration between drummer Antinom (also of Texas's black metal squadron Dagon) and 'O.A.', who handles the rest of the instruments. The great cover art, worthy of a sigil from some noble house of the drow of Menzoberranzan, is an instant plus, building up anticipation for the band's aural capacities. And once you build the courage to journey inside its subterranean halls, your ears shall be greeted with a righteous blast of indignant, old school grinding death metal which will floor you like a hellish steamroller.

And we're talking old school. In fact, the sound it most closely resembles to mine ears would be the first two full-lengths of US veterans Incantation, simply for their low-end vocals and the gurgling force of the guitars. But Vasaeleth have more tricks up their black magick sleeves, for the subtle incorporation of atmosphere through the haunted synths that often swell up in the background. But the guitars are so thick and juicy, like a fresh steak carved from some recent human sacrifice, that these other elements are kept far from the fore. Instead, prepare for 30 minutes of bludgeoning, multi-tracked guitars that ooze forth out of every cavity of Hell, and a cavernous, crushing weight reminiscent of last year's fantastic offerings from Funebrarum (The Sleep of Morbid Dreams) and Mexico's Denial (Catacombs of the Grotesque), or the other Texas band to delve into these depths: Decrepitaph.

There is not a track among these eight which will remove you from the experience, but to center in on a few specific pieces that terrified me, I would have to begin with "Gateways to the Cemetery of Being", a brooding, doom-laden death-bog that provokes a crazy ass, popping squeal among the chords half way through that I found irresistible. "Spirit of Noxious Miasmas" is likewise very slow, and highly atmospheric, like being violated by a some Shoggoth while you are planted face-first on a cold marble altar, blood-candles burning about you and your eyes affixed to the knife that will end it all once the extraworldly fiend has had its way. For more uptempo fare, try the turbulent rhythms of "Curse Seeping Through Flesh" or the grinding molasses of "Figures of Chained Spirits", or brave the ungodly depths of "Adorned and Iridescent". You can't really lose with Vasaeleth, if you enjoy one song then the rest will follow.

I know you, Old Hag.
Who arrogantly struts in mosques--watcher of the sacred.
I, inhaler of the Black Curse, provoke your cowardly presence.

Is there a downside to this style? Not exactly, but I will admit that the band aren't big on individual riffs. The guitars are constantly crushing your neck, but this is not the type of album you'll be running back to for specific moments. It's better just to sit through the whole beast, and let it lull you into claustrophobic horror while it vampirizes the very essence from your blood and marrow from your bones. The lyrics are very simple, but also conform wonderfully to the tone of the music. Crypt Born and Tethered to Ruin is not a perfect debut in the grand scheme, certainly you must be in the mood for what the band is offering, but if you're ripe for a dungeoneering escapade among the columns and caverns of hopelessness, I haven't heard much else of late that functions quite so fiendishly as Vasaeleth.

Highlights: You will need extra torches for this descent.