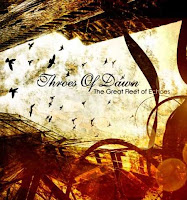 Throes of Dawn are a fairly interesting Finnish band who turned some heads when they transitioned from their melodic black metal roots into a quite fashionable, atmospheric hybrid of gothic and black metal. I personally enjoyed their 3rd album, Binding of the Spirit a good deal, a subtle and powerful infusion of consistent melodies, one of those albums you just slide into your CD player and feel hard pressed to turn off, even though it feels slow to develop. Not so much a fan of their following effort Quicksilver Clouds, but that too had its moments. I had probably written the band off after this, but six years later they return with their most highly atmospheric, least 'metal' offering to date, The Great Fleet of Echoes.

After such a hiatus, one might wonder whether the band could have a change of heart and return to their blacker roots, but that is just not the case here. If anything, The Great Fleet of Echoes takes the lush synths, acoustic and clean guitars, pianos and dreamy vocals of its predecessor to a new height, and the entire piece plays out like some fantastic idyll caught between dew-stained breaths on a cold, post-apocalyptic morning, or one on which you simply 'wake up' to a new level of reality that moves about you like poetry. Henri Koivula's vocals here are bound to appeal to the Sentenced/Paradise Lost/Crematory gothic metal sect, often resounding through a mid range, or resorting to mysterious whispers. This is not a riff-intensive album, so if you come into the songs expecting much in the way of brazen, memorable melodies you could be disappointed. This is more of an attempt to encapsulate an enigmatic, and gloriously depressing environment within 55 minutes of playtime.

Nothing here is even remotely complex, and to be truthful my favorite moments on the album are those that delve into the more psychedelic edge, like "Soft Whispers of the Chemical Sun" with its ambient synth segues. This is a great track, kind of like a mid-era Tiamat meets Tangerine Dream, and in fact, at this album's best, it does remind me somewhat of Tiamat's inspiring, beautiful album A Deeper Kind of Slumber. Other memorable tracks here are the heavier, grooving "We Have Ways to Hurt You", the somber "Blue Dead Skies" or the multi-layered epic sensations of the title track. Sadly, the album is not all moments of bliss. Many of the tracks feel stretched out and dull, despite the atmosphere they so long to impart. Though the melodies are qualified and the vocals tight, very rarely do they leap off the disc into the imagination, creating a mild ennui where the mind drifts elsewhere.

Those of you who cherished the bands past albums Binding of the Spirit and Quicksilver Clouds might want to give it a listen, and also fans of other melodic black metal bands gone psychedelic like Fall of the Leafe or Autumnblaze, though Throes of Dawn don't run quite so far afield. I might add that the lyrics here are quite nice. Otherwise, I didn't take to the album, aside from the few better songs, so if you're a newcomer I'd cut a path straight for Binding of the Spirit.

Verdict: Indifference [6.75/10] (from the open wounds the future runs)