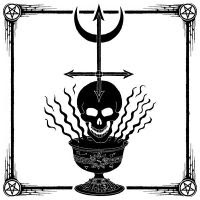 If you follow the Finnish black metal scene, you are probably well aware of Baptism, another of the cult bands there to put the ultra raw spin on their work, with a driving, melodic and desperate style which mirrors the faster material of their countrymen Horna, or Behexen, or perhaps Satanic Warmaster. All of these comparisons make more sense than you think, as the sole studio member of Baptism, Kommander Lord Sargofagian, has been involved in all of those bands to various degrees. Chalice of Death is a new 7" vinyl EP released through Nothern Heritage in the expected limited pressing of 666 copies, and it features two compositions at nearly 14 minutes of play-length.

The A-side "Chalice of Death" starts with a Darkthrone-like fast rocking, almost thrash rhythm which soon surges into a melodic backdrop, a rather lush soundscape which does feel somewhat repressed behind Sargofagian's vocals, due entirely the production. It's not all bad, though, for you can actually make out the streaming notes, and though it does border on too repetetive, much of the track feels like a wall of golden force, a vein that continues to bleed long after it has been tapped. "The Crown ov Darkness" is another sheer storm of melodic infusion, with a rampant murderous underpinning to the main rhythm that reminded me of Germany's Endstille, only more primally connected to the aesthetics of the low-fi standard. The speed alternates between the quicker currents surrounding the verse to a mid-paced rhythm inspired by Hellhammer, Bathory and so forth, which crashing melodies that too feel just a slight bit more distant than they could have been, and some wavering, clean vocals.

This is the raw deal, and the real deal. If you fancy big budget black metal with a lot of symphonic elements or chick vocals then you should stay the hell away from this, just as you would any of the more licentious, cult acts of Finland. Both of the tracks do feel as they could use a little trimming, for their added length does little to enthrall, but to repel the listener. The melodies are promising if simple, and better experienced by someone willing to immerse himself/herself into their atmosphere. I wouldn't say this was an essential release, and those new to the band might be better served by tracking down The Beherial Midnight or Morbid Wings of Sathanas. However, this is sound enough material for Baptism, perhaps a teaser for a more glorious 4th full-length to come.