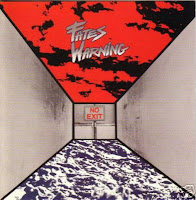 We could lament the loss of our beloved John Arch, or the fanciful forays of Fates Warning into and beyond the realm of imagination, but we simply could not fight the future, and some credit must be given to the band for choosing an excellent replacement in Ray Alder. On the surface, he's another shrieker without much of a difference, and with No Exit, he gives his most out of control effort, which truly coincides with the music. This album is the big 'transition' between the fantasy speed and power metal of the first three efforts, and the more mechanical, prog-metal lite that would follow through the 90s. But you wouldn't know that from the starting gate, because this one opens with a serious BANG...

And that cannon is "Anarchy Divine", the first single and video for the album, which promptly tears your fucking face off after the bizarre vocal/acoustic intro "No Exit" with electrics fizzing off into the background. Perhaps the heaviest track of Fates Warning's career, "Anarchy Divine" opens with a deep, punishing rhythm that accumulates scintillating melodies until the first, brilliant lead break before the minute mark, and then comes the setup for the verse...a steady thrash riff that should have your fists flying into your neighbors face, or there is simply no justice in the world. Alder returns over this verse, like an irate banshee with something to prove, and lyrics of far more...well, relevance than we're used to from this band. John who? The leads continue to impress here (Matheos and his partners have the fortunate tendency to almost never throw a bum lead into a song). This track is a bold and bright step for the band, and immediately solicited a forgiveness for the shift in singers.

"Silent Cries" enters with yet another barrage of guitars, but quickly transforms into an uptempo bass line sprinkle in acoustics and precise, flowing thrash rhythms while Alder really shows you his range, a roller coaster of mid-octave honesty and heavenly shrieking that could probably effectively communicate with a bird of prey. Personally I just love how the choppy tech-thrash rhythm winds below his siren calling. "In a Word" stretches further into ballad-hood, but Alder's 'arching' melodies cast their shadows well into the surge of chords, which in turn herald some of his most penetrating vocals on the entire album. A balance of subtlety and intensity, like the Fates in a drunken game over some poor sod's life-thread. "Shades of Heavenly Death" marks the last of the regular length tracks on the album, a brooding crusher with more piercing cries that explores interesting territory, with a huge doom riff popping up later in the track before a tranquil, haunting acoustic sequence.

Fates Warning took a risk with the rest of this album, but one that largely paid off. "The Ivory Gate of Dreams" is a nearly 22-minute track comprised of 8 'movements', a symphony of weighted acoustic clemency and powerful showstopping metal riffs that is almost entirely engrossing. In particular, I am quite fond of the "Daylight Dreamers" metal sequence with its frightening, shrill vocal patterns, and ditto for "Ivory Tower". "Acquiescence" sends us off to the outro with a wild, struggling abandon and more of Alder's stratospheric presence. As a single, epic length track, "The Ivory Gate of Dreams" is more hit than miss, though it does seem to follow the tedious pattern of acoustic to metal to acoustic to metal which does effect some predictability on the listener (bands like Dream Theater and Edge of Sanity would unfortunately continue this trend, to a degree).

No Exit is good. No, great, but it does have a few points which mark it as less remarkable than its predecessors. For one, I don't exactly love the production here, but it's not a far cry from Awaken the Guardian. It's simply a matter of the band using crunchier low end guitar rhythms, which balanced with the ripping leads almost lend too much power to Alder's tongue in the mix. As for the songs, most are rock solid, with the exceptions being "Shades of Heavenly Death" and a few of the movements of "The Ivory Gate". It's an anomaly in the band's discography, since they would shift to a new direction with the follow-up, and perhaps best regarded as Fates' sole entry into the thrash metal genre that was dominating the world in 1988, without losing touch with the melodic power side of its elder siblings. And, let's be honest, how many songs are as fun for headbanging with friends as "Anarchy Divine"?

Highlights: Anarchy Divine, Silent Cries, In a Word, (most of) The Ivory Gate of Dreams