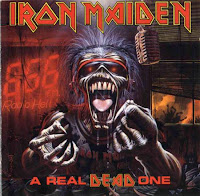 Like its companion A Real Live One, this is a collection taken from various dates Iron Maiden performed in Europe, in 1992. But the difference is in the track selection. A Real Live One contained tracks from Somewhere in Time and beyond, while this dwells in the earlier portion of the band's career. Thus, A Real Dead One feels more redundant with Live After Death and diehards of Paul Di'anno's vocals on the first two albums will have to deal with any natural prejudice they have against Dickinson's interpretation of the material. It was a pretty novel, but ultimately worthless marketing ploy, and surely Iron Maiden could have just released the two albums together as a 2-disc set and scab a little less from their fans. Which, of course, they did...by releasing them both as A Real Live Dead One in 1998, for an even further rubbing in the wrong way...

Surprisingly, all of the Di'anno era material here is culled from the debut, Iron Maiden, and represents half of the overall track list. "Prowler", "Transylvania", "Remember Tomorrow", "Sanctuary", "Running Free" and "Iron Maiden" are all present. Bruce is actually pretty convincing with "Remember Tomorrow" and "Iron Maiden", and "Transylvania" remains instrumental, so it shouldn't be too painful if you're the most stubborn variety of purist. There are NO tracks here from Killers...which seems strange, but the Number of the Beast selections are all quite predictable: "The Number of the Beast", "Run to the Hills" and "Hallowed Be Thy Name".

None of these feel as if the band are playing at their peak, suffering from some of the same subdued vibrancy as the material on A Real Live One. This is highly likely to be more the fault of the sound board and mixing engineers than the band, but still, it does not a good product make, and feels like Maiden and their record label might have just desperately wanted to get more out on the shelves. Rounding out the album are "The Trooper" and "Where Eagles Dare" from Piece of Mind, and poor old Powerslave gets only "2 Minutes to Midnight", which was probably my favorite on the album due to the swollen crowd accompaniment.

If you're going to actually pick this up in 2010 or beyond, and own neither of the individual releases, the safest bet is just to grab A Real Live Dead One, and kill two birds with one wallet. But I must admit that I find neither of these offerings all that memorable or essential, and to date the default live Maiden offering remains Live After Death. I won't go so far as to say they suck, but the most they can deliver is some new Derek Riggs cover imagery, liner notes and fairly average performances.