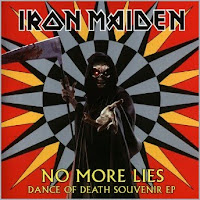 As one of the most popular forces in all metal music, with over 30 years of history, you can bet Iron Maiden is the sort of band who have released countless singles, EPs, compilations, and other debris into the marketplace, many of which are simply not worth the cost of the materials they are printed on, having been rendered useless through their inclusion elsewhere. The No More Lies EP, which was released post- one of the band's most mediocre albums, Dance of Death, and it is quite an extravagant package. Openly billed a 'Souvenir', it was released as a one year anniversary to the full-length, which is horseshit, since there was little to nothing about that album worth celebrating.

It is, in fact, a voluntary extortion in which fans can give Iron Maiden even more money than they already have (keep in mind this is a band paid 100s of thousands of dollars for individual live performances). But it IS voluntary, so it's not like the Ministry of Media Culture shows up at your door with a cattle prod to make sure you've purchased your copy. As far as its contents, I'd have to consider it more of an aesthetic value, for the 12 page spread included, quite rare for an EP release. There are three tracks and a video clip, including the titular and redundant "No More Lies", which we've already got on Dance of Death itself. The other two songs are also taken from the album, but appear here in alternate versions. In the case of "Paschendale", we are give an orchestral treatment which in my opinion is far superior to the original, and leads to me believe that the entire Dance of Death recording might have benefited from this approach. As for the electric version of "Journeyman", that too is superior, but the song is still not very interesting (the original is one of the most mundane tracks Maiden have written outside of Virtual XI).

But hidden at the end of "Journeyman" is a strange little rendition of "Age of Innocence" with Nicko McBrain speaking out some of the vocals and ad-libbing as if it were some Monty Python skit. This is amusing once or twice, especially when he starts 'singing' the guitar solo, and to be honest I would possibly buy an entire album of him doing this. The video is a typical live performance video which matters very little, and there is also a wristband included...which you can put on to stroke yourself to your Eddie posters and Live at Donnington.

It's a pretty package, but I can't help but feel it would have been better served towards a longer release, with maybe 5-6 songs that you can't get anywhere else. "Paschendale" with orchestra is the most vital part of the EP, and I think more of this would have been lovely, and well worth the money. A re-hashed studio track, Nicko McBrain 'skit', wristband and another forgettable version of "Journeyman" are just not valuable components for a fan package, unless those fans are truly numb in the grey matter.