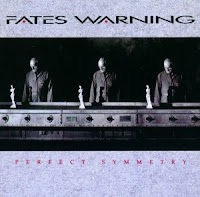 A new logo. A photo as cover art. A sleek, rigid industrial aesthetic to both of them.

Something had shifted in the Fates Warning camp, and though the band had desired to change their name following the departure of John Arch in '87, Metal Blade urged them to keep it. This wasn't such a big deal for 1998's No Exit, which, while debuting a new frontman and injecting an appreciable fraction of thrash metal into their equation, still sounded largely like the same band. As for their 5th album, Perfect Symmetry, you will notice only vague similarities even to its direct predecessor, and these manifest primarily in the softer side of that album, ala the acoustic segments of "In a Word" or "The Ivory Gate of Dreams".

What is even further confounding is that the band were making all these changes while their success continue to climb among metal fans. I certainly don't have the stats to back myself up here, but Perfect Symmetry was possibly their most popular album, or at least the one most of their new fans were first exposed to, thanks to the decent video play of "Through Different Eyes" and increased word of mouth, and probably the massive success of Queensrÿche's masterpiece Operation: Mindcrime the year prior, which had brought many into this fold (and to their next stop, Dream Theater). This could all be saddening, were Perfect Symmetry not a pretty fascinating album in its own right. Sure, this sees the nearly complete castration of the band's power/thrash boner of previous years, but the metal remains, and it's unique. There is a mechanical aesthetic to the album which gives it a conceptual polish, and this can at least be partially attributed to the unique drumming of Mark Zonder (ex-Warlord), who replaces Steve Zimmerman here with a simple stick-weaving that that derives as much from Neil Peart and fusion artists as it does from his metal background.

"Part of the Machine" serves as an elegant christening to the album's industrial prog-lite aesthetics, in not only the glaring song title but the very unique, brooding rhythms which harry the melodies into the chugging, assembly line guitars in the verse. Alder is more tortured here, but still retains the ability to fly off the handle at a second's notice. The tempo shifts subtly here or there, the bass plucking through the factory atmosphere and no, you haven't heard something quite like this before. It was easy to see the appeal of "Through Different Eyes" as the single, for the bluesy, morose intro makes a great catalyst for an 80s rock song, and the track's central melody is a brush of subtle majesty without derailing the album's bleak, pensive candor. It would be difficult to deny the accessible and catchy, if tight-reigned chorus, in an era where such things were packing stadiums full of hard rock fans with millions of dollars to lavish upon their idols.

"Static Acts" is a nice slice of melodic exercise, which descends into a brooding acoustic verse before the bridge just hammers you in Alder's silver-lined, open throat and an amazing guitar rhythm. It's quite the rush, channeling a small level of the band's ferocity from the previous, and this is welcome. "A World Apart" is tranquil but dark, the context of generational and ethnic gaps explored with a haunting resonance, picking up aggression only in the seconds before the lead breaks over a mechanical rhythm guitar. "At Fate's Hands" is perhaps one of the more ambitious works here, nearly 8 minutes long: an orchestrated ballad with pianos and strings that slowly gains ground as the band steps into ponderous, slower paced rock and then a wonderful, if downcast sequence after 3:00 where synths ring out over a slow but steady dagger of antagonistic jamming and Zonder's fancy rhythm keeping. It's like a modern day "Moby Dick" meets "Kashmir", if performed by robotic factory workers.

"The Arena" drops another into the album's metal quota, a mesmerizing stream of harmony, gorgeous bass lines and Alder's screaming down of the world, from the lofty smokestacks and skyscrapers to the streets upon which he walks. One of the best tracks here, and an fine example of how this band once mastered nearly everything it touched. "Chasing Time" was another fan favorite, sort of a "Silent Lucidity" for Fates Warning, a tapestry of sadness, this time not embarking into metal territory whatsoever. It's catchy, but my least favorite track on the entire album. "Nothing Left to Say" starts out with a jarring rhythm from the school of "YYZ", spinning fusion leads into its concrete foundation before it too parts for acoustic tranquility. However, I will point out that the entire segment beginning at 4:00 is breathtaking, imbued with true emotional power, like a forgotten king clearing the cobwebs from his thrown and taking up his crown again.

Perfect Symmetry might not be as technically astounding as some might desire from their progressive metal, and in truth, bands like Watchtower, Coroner and Deathrow all released albums of staggering proficiency and composition in 1989 which leave it far behind in the dust. Still, it's got a distinction about it, a charm that is difficult to resist, and it remains easily the best album of the 'latter day Fates' to this day. For though they might try, Parallels and Inside Out could simply not match its bounty of melodies and desperation, and anything beyond that is hardly worth talking about.

Highlights: Static Acts, At Fate's Hands, The Arena, Nothing Left to Say