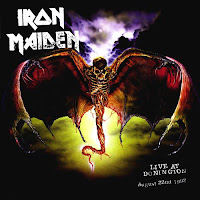 Because two live albums were not enough for 1993, Iron Maiden also decided to release a 2CD set covering their performance from the 1992 Monsters of Rock festival, recorded in August at Donington. Granted, the nearly 2 hour set captured here is more substantial than either A Real Live One or A Real Dead One, and since Fear of the Dark had been the most recent studio offering, we escape the imminent nightmare of the next few albums. But Live at Donington suffers for another reason...the sound is just not that great. And the vocals seem a little strained, even as early as the first track I feel like Dickinson is about to lose his voice.

I don't know if he smoked a few packs that day, or if he was recovering from a bad cold or perhaps the onset of bronchitis, but Bruce seems a little off during certain parts of "Be Quick or Be Dead", which opens the first disc. It might also be that he seems a little softer in the mix than some of the band's other live albums. I wouldn't call it a deal breaker, as it's not a terrible performance, but that and the rather sterile feel to the guitars and excess plunkiness of the bass have me leaning towards the studio version. Luckily there are far better sounding tracks on this recording.

I'll admit, the selection of songs here is pretty well spread across the band's discography up to this point. Fear of the Dark is given a healthy representation with "Afraid to Shoot Strangers", "From Here to Eternity", "Wasting Love", "Fear of the Dark", and the aforementioned "Be Quick or Be Dead", all on the first disc. Of these, none sound truly fresh or invigoration on Live at Donington due to the lackluster sound, but I'd go with "Fear of the Dark" from this lot. No Prayer for the Dying gets two tracks in the set: "Tailgunner" and "Bring Your Daughter to the Slaughter", and Seventh Son of a Seventh Son is in good hands with "The Evil That Men Do", "The Clairvoyant" and "Can I Play With Madness?" Again, they all sound a little sterile, but at least the crowd interaction for "Bring Your Daughter..." brightens up the recording, if a little.

This is yet another live recording where the band's best album Somewhere in Time is mis-represented, with only "Heaven Can Wait" on the track list. I really don't get it...surely the band could not have been burnt out by this point on all the majesty of that masterpiece. Was it some kind of conspiracy between the band and an ignorant fanbase whose letters and rash opinions helped determine the set list? Hogwash! Powerslave and Piece of Mind are also snubbed here with one track each: "2 Minutes to Midnight" and "The Trooper". The Number of the Beast is given much more lavish attention, with the title track, "Run to the Hills" and "Hallowed Be Thy Name", and the Di'anno years provide "Iron Maiden", "Sanctuary", and "Running Free", all of which are pretty obvious selections. Most of this is confined to the 2nd disc, and the stronger pieces here were "Wasting Years", "2 Minutes to Midnight" and "Running Free" for the good crowd service.

The biggest issue with Live at Donington is of course the fact that it feels redundant after two other live albums being released just months before. But it also really pales in comparison to the band's hallmark Live After Death (after which no subpar live offering should have been issue unless it was a cheap grab for more money). The track list, while thorough enough to include something from all of their albums to this point, also feels a little redundant. Had there been a few unexpected surprises among the selections, it might have offset the rather bleak tones off the mixer, but I'd imagine the band feels the need to rifle out the hits for all the casual fans that want them, and the rest of us can just dust off that 1985 LP and ignore this.