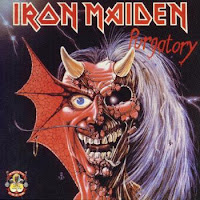 This is the third release in the First Ten Years collection, 10 EPs that collect 20 of the band's singles during their first decade of existence. Purgatory was a 2-tracker, standard single released in 1981 and the Maiden Japan EP was also released that year which I've already covered elsewhere in its extended, superior, fan club format upon which you could experience the whole gig, as the penultimate live recording of the band with their original vocalist Paul Di'anno.

Because it's all available elsewhere, I find this to be perhaps the single most worthless EP in the entire series. Both "Purgatory" and "Genghis Khan" are available on Di'anno's 2nd album with the band, Killers, though admittedly they are both great songs that I don't mind hearing again...I would only mind paying for it. The Maiden Japan EP contains only four of the tracks from the performance, beginning with "Running Free", then the murky 70s vibes of "Remember Tomorrow", the wailing "Killers" and the Zep-stepping grooves and morose melodies that complete "Innocent Exile". These all sound great, but I've covered them elsewhere, and I'd certainly urge any Maiden fan to try and track down that full-length version of the concert rather than this EP or the Maiden Japan EP itself, which is identical if you've got the standard domestic version.

"Listen With Nicko!" begins with the drummer mock snoring, which is my sentiment exactly when faced with the prospect of another of his rambling, schizoid anecdotes as he takes the piss out of himself and showcases the history of these tracks, which are coincidentally not something he himself was a part of (Clive Burr was still drumming). We learn little details like the original title of "Purgatory" and how it was one of the only singles that didn't chart in the top #50 for Maiden (by 1990, anyway), and McBrain jokingly infers that had he been part of the band then, perhaps it would have charted more favorably...

Simply put, this is the least compelling of the First Ten Years EPs, with very little of interest to offer unless it is your only means of acquiring material from the Maiden Japan EP. "Purgatory" and "Genghis Khan" are both great, but they are greater as a part of Killers. Otherwise, this is good only for its voucher towards the box case.