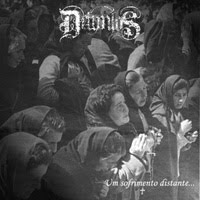 Defuntos is a swell Portuguese band that I discovered a short time ago through their split with Australian Striborg (a band whom, until recently, I had very much underestimated). By 'swell', I mean this is some sick and suicidal black/doom which will void your bowels and find you religion, unless you have branded yourself a heathen forever and given up on the world. In which case, this is an adequate soundtrack for your demise, whether that involves percocet and hard liquor or just a quick line across the wrist with a rusted whatever that you have lying about. Um Sofrimento Distante is a brief, 2 track EP the band released in between their albums Sangue Morto (2007) and A Negra Vastidão das Nossas Almas (2008), and while the tracks are not quite as crushing or memorable as some of the material from the full-lengths, they're still interesting if you can find the mood.

Defuntos stands out as another of those bands (like Necromantia or earlier Barathrum) who eschew the use of guitar and instead enhance the presence of the bass over the drums. Conde F. is a sick fuck who will do just about anything in that microphone to ruin your day, whether that's a regulated black snarl, morbid goth vocals or throat clearing, crooked madness. The writing is so basal that I honestly could not confirm whether it was improvised or not, but it matters little if your aim is to swallow your end down this spiral to oblivion. "Luctus Maeror" is nearly 10 minutes in length, with a cool gothic bass line that plummets along to Conde F's tortured ranting. It really does not sustain itself well through such an extensive play time, but for the few moments it absorbed me, I was honestly hooked. Right through the flesh. "Margaret Moyes" is slower and more ritualistic, with the vocals often creating a parallel line to the bass before they become Salacious Crumb-like, like a wicked child strangling the frisky cat on the playground and being sent to a place where padded walls will fail to right his wrong.

This is not for the faint of heart, and really, unless you can envision yourself listening to something like old Celtic Frost, without the guitars, slower than a crawl, while Tom G. Warrior is on a binger in which he's half choking on mouthwash and hatred, I'd advise you stay away from this. Of course, the band would only be too happy that you stayed away from their obscure art, but I certainly recommend their full-lengths if you crave something depressing to the very edge of possibility.