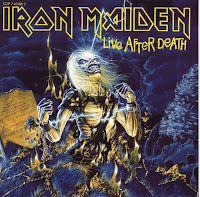 Perhaps it's just that the set list is drawn from most of my favorite Iron Maiden albums and even individual songs. Perhaps its the killer Derek Riggs cover art. Perhaps its the very honest, and fit for its era production standard. For all of these reasons, and more, Live After Death is my very favorite Iron Maiden live experience on disc, and probably ranks as one of my favorite live albums, if not THE favorite, in all of metal. Why, do you say? Is it because I'm old, and perhaps a little biased or clouded with the haze of nostalgia? You could always argue that a little of this plays into any opinion of any decades old recording, but I do in fact believe that this beloved band was on the top of their game in the early to mid-80s, when their imaginations were allowed to run wild and metal music was maturing in general.

In fact, Live After Death was one of the last albums where Maiden, in my opinion, reigned supreme, before the emerging scenes of speed, power and thrash metal took many of their ideas and ideals and elevated them to the next level of intensity. Now I'm not saying they were the heaviest, or fastest band in the realm, but certainly one of the least compromising bands to be striking gold in the bigger picture, in the Billboard charts or the mainstream rock audience. After the following, masterful full-length Somewhere in Time, I don't think the band has ever been able to recover the crown. They've put out good albums, and good songs, but somewhere around the release of Seventh Son of a Seventh Son, somehow, a levee broke.

Now, Live After Death is still a live album, consisting of tracks you likely already owned in their studio forms, and it does bear that eternal limitation of 'not being there'. And clearly, if you have not had a chance to witness this legendary band in the arena setting, I promise you it is very much worthwhile, something you should probably do before it's no longer possible due to the age of the band. But the sound here is engrossing, with so many of their earlier, darker tracks in the set-list, all of which are memorable and polished. There is a remastered version of this album available from 1998 which features a bonus disc of 5 tracks recorded in 1984 at the Hammersmith Odeon. I am not reviewing that version, just the original album recorded in 1985 at the Long Beach Arena.

There are 12 tracks, opening with the Winston Churchill speech sample and "Aces High", and how could you psyche up a crowd more than that, even if they are American. The song sounds glorious, and the band are quick to follow this up with another Powerslave staple, "2 Minutes to Midnight". At this point, ever person in that audience and the inner child of every listener to the album over the next 25 years is screaming THIS WILL FUCKING RULE. And so it does. As if that one-two combo wasn't enough, they next launch into "The Trooper", which probably forced much hyperventilation and rioting, as it probably the most recognizable Iron Maiden track up to this point, and sounds raucuous and perfect in this live setting, as if it were simply never meant for anything but the stage. After this, "Revelations" is another perfect fit, as the bass wanders beneath the guitars in the verse, and the pace of the track lets the crowd simmer down a little without ceasing the rock.

But "Flight of Icarus" scales straight back up the majestic heights of Dickinson's howling, perhaps the best single live serving of this track I've ever heard, with brazen guitars and pumping bass lines that counteract one another beautifully. After this, they play "Rime of the Ancient Mariner", and not just a snippet of the track that one might suspect in order to keep up the momentum of the set, but 13 fucking minutes of excellence...including the eerie bridge segment in which the crowd quiets slightly, but somehow transforms into itself into a sound akin to the wind howling over the song's grim, haunted waters, or gulls shrieking about the mast. Not content with just this epic, they next launch into "Powerslave", one of Maiden's greatest songs, and it sounds just as intense as you need it.

Thus far the set has been dominated by material from Piece of Mind and Powerslave, so for the rest of the show the band dials it back through the years. This begins with "The Number of the Beast" and "Hallowed Be Thy Name" back to back, both of which excel here with a good balance of uplifting melody and nostalgic grace. Following this, the band's namesake "Iron Maiden" as Dickinson works up the crowd, and I'm sad to say that this version of the song, with Bruce on vocals, sounds every bit the match for Paul Di'anno's original, as it swerves into a higher range but delivers just as powerfully through the chorus backing vocals. "Run to the Hills" again works the audience into a frenzy, and then the band closes the disc with their classic "Running Free", the crowd screaming!

I can imagine driving home after this 'incident', with your heart warmed and mind racing through every mile of just how much you love metal music. Such enthusiasm in those days for the genre, and not just by a marginalized niche of tasteful individuals. Strangely, there is nothing from Killers on this core recording, though the bonus disc version at least includes "Wrathchild".
Other than that, I can't think of a single complaing about Live After Death. It sounds perfect to me even after about 70% of my life has passed, and if there is one live album well worth spending the money to attain, it is this one. Lucky for you, you can pick it up today remastered WITH the five additional tracks on the 2nd disc: "Wrathchild", "22 Acacia Avenue", "Children of the Damned", "Die With Your Boots On", and "Phantom of the Opera". Even as a diehard purist, it's hard not to think of that as a plus...